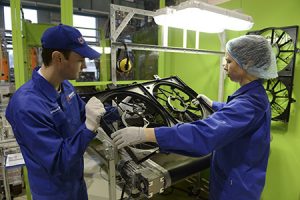 Russia’s Ministry of Economic Development has revealed it plans to force components makers to microchip their products to help crack down on the counterfeit parts trade in the country.

Speaking at a recent meeting of the Russian Union of Industrialists and Entrepreneurs, ministry spokesman Pavel Fink said that around half of the $40 billion automotive components and spare parts industry in the country was estimated to be accounted for by counterfeit products, with around 80% of those counterfeit parts being imported.

Labels containing electronic chips already used in the fur industry in Russia cost only 22 roubles (around 40 cents) apiece, he stressed. A similar system could be very useful in the components market, he suggested, not least in terms of encouraging legal parts producers.

The automotive components sector has previously been highlighted by Russia’s Industry and Trade Ministry as one of several sectors in which it, too, would like to see better traceability. The others include wood products and aviation components.

The government’s concern centres more around the safety implications: studies suggest one in three car accidents in Russia is attributable to the use of counterfeit components.

Russia’s Association of Automotive Dealers, ROAD, recently sent a letter to the authorities offering to introduce a new licensing regime for workshops as an alternative to a new component labelling system. ROAD executives have suggested carmakers can address the problem of counterfeit parts themselves and that the key issue is to clamp down on unauthorised workshops using parts of unspecified origin.

Russian OEMs have been cutting the price of genuine components since the start of this year, official statistics show. Between March and April this year, Ford, Mazda, Peugeot and Citroën all cut their parts prices by 25-30%, after similar earlier moves by Audi, Volkswagen and Skoda.

Sources at a number of OEMs have confirmed such cuts were targeted mainly at the counterfeit trade.

Aftermarket parts have become more significant in Russia’s depressed automotive market in recent times as car owners have sought to prolong the life of older vehicles, rather than buying new ones. This has made it all the more important to ensure customers use only properly authorised workshops supplying genuine parts, the OEM sources have stressed.

Dmitry Babisnky, a consultant in the analytical centre of SBS Consulting, has suggested the ministry’s plans to chip components will have limited effect, however, unless the scheme goes as far as tier three suppliers, where counterfeiting is also common.

Despite this, labelling tier one products will go some way towards addressing the problem, he admitted – especially if vehicles without the proper labels were subsequently failed during annual vehicle roadworthiness inspections.

The steps needed to support Russia’s automotive logistics sector as the market returns to growth will be at the heart of discussions at this year’s Automotive Logistics Russia summit on July 5th in Moscow.