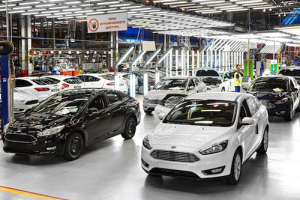 Ford is ending passenger car production in Russia and has cancelled future imports to the country. The move is a dramatic turnaround on plans announced in January this year that it was embarking on a $500m reorganisation of its loss-making joint venture with local carmaker Sollers. It means the closure of the Vsevolozhsk plant near St Petersburg (pictured) and the Naberezhnye Chelny plant in Tatarstan, as well as the Elabuga engine plant, which opened just four years ago.

Production of the Transit van in the Elabuga vehicle assembly plant will continue, though Kuga and Explorer vehicles has stopped.

The decision by Ford has panicked the Russian government, with several top officials confirming it would now assist in negotiations on the possible takeover of the plants to avoid closures.

Ford Sollers said in a statement that the Russian car market had been “under a strong pressure over the past few years” and the anticipated recovery of sales “was taking place slower than it was originally expected”. Moreover, it said that demand had shifted “towards cheaper models”, which was an additional factor that negatively affected the company’s sales.

Ford Sollers has been badly hit by the economic crisis in Russia. It sold just more than 53,000 vehicles there last year, down heavily on the 131,000 it sold in 2012. The two vehicle plants operated by the company, in Vsevolozhsk near St Petersburg and Naberezhnye Chelny in Tatarstan, were designed to produce 360,000 cars per year, while the engine plant had the installed annual production capacity to make 105,000 engines.

“Among foreign carmakers it is probably only Groupe PSA that have sales even worse than Ford, and it is also currently re-considering its development prospects on the Russian market,” commented Eugene Walter, director of the local consulting agency Walter Construction.

Ford Sollers is currently in negotiations to sell its two vehicle assembly plants, according to Zoya Kaika, deputy director of Sollers, but he would not disclose with which companies the company was in discussions.

The government is also aiming to support talks between companies, said Dmitry Kozak, deputy prime minister of Russia. Speaking during a press conference in early April he said other carmakers were ready to purchase the plants, but again not providing any additional information.

Nevertheless, several carmakers are interested, including Hyundai, according to Denis Manturov, Russia’s Industry and Trade minister. He said a decision should be made in the next couple of months.

More specifically, according to Alexander Drozdenko, governor of Leningrad Oblast, where the Vsevolozhsk plant is based, there are two carmakers interested in purchasing the Ford Sollers’ plant near St Petersburg. He said talks could be finished this month.