Russian vehicle imports hit a bump in the road 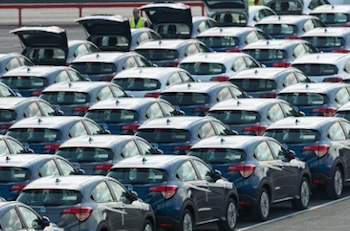 Vehicle imports to Russia have been growing for almost two years alongside the recovery in sales in the domestic market. In 2018, the country imported 293,100 finished vehicles, up almost 10% compared with the same period the previous year, according to the Russian Federal Customs Service. The value of vehicles imported reached $7.6 billion last year, the highest figure since 2014.

Those vehicles are coming from a range of countries, according to Russian consulting agency Autostat. The leading ones are: Japan, Germany, US, UK, Thailand, Slovakia, Hungary, Turkey, China and Finland.

However, sales of passenger cars and light vehicles in Russia dropped in February by 3.6% year-on-year, according to Russia’s Association of European Businesses (AEB). Jorg Shraiberg, chairman of the AEB, said the buying power of the Russian population was weakening and making continued growth prospects for the Russian vehicle market less certain.

The increase in imports to satisfy consumer preferences in Russia over the last 22 months could be explained by a gradual reduction in import duties across the Eurasian Economic Union (EEU), which includes Russia, Armenia, Belarus, Kazakhstan and Kyrgyzstan. From September 1 last year, the EEU cut duties on imported finished vehicles from 20% to 17%. It had reduced them in 2017 from 23% to 20%. Although the final decision has not been made yet, there are plans to reduce the duties further, down to 15%.

The reductions are being made to honour obligations EEU member states took when they individually joined the World Trade Organization.

In Russia, the federal government decided to offset the reduction in import duties on finished vehicles by increasing the ‘utilisation’ fee – the tax ostensibly designed to account for recycling charges at the end of the imported vehicle’s life. From 2014, carmakers have had to pay the utilisation fee both for vehicles assembled in Russia and those imported to the country, but on locally-made vehicles the government reimburses the fee.

In April 2018, Russia raised the utilisation fee and for some models the increase was almost double. In October last year, Russian deputy prime minister, Dmitry Kozak proposed a further increase of 30% but there is no information on when or if that is likely to happen.

By contrast, the government indirectly supports automotive logistics in Russia by allocating subsidies on deliveries from the Far East to the European side of Russia. In Autumn last year Vadim Shvetsov, owner of Russian carmaker Sollers, revealed that its logistics company Lorus SCM was even looking at redirecting vehicle imports from St Petersburg through Vladivostok port by 120,000 units because of the special tariffs on vehicle transport offered by Russian Railways.