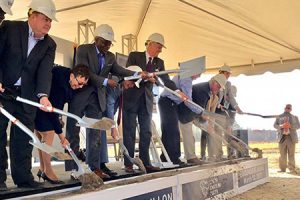 South Carolina Ports Authority (SCPA) has broken ground on a new inland port in the town of Dillon. The move follows its recent success in establishing an inland logistics hub used by BMW and tyremaker Michelin.

In choosing a location in the eastern part of South Carolina with close proximity to I-95, class one railway CSX’s ‘A’ rail line, and the North Carolina border, SCPA is applying many of the same strategies with the Dillon facility as it did in developing its original inland port in Greer, which was strategically constructed near BMW’s Spartanburg plant.

SCPA president and chief executive Jim Newsome told Automotive Logistics that while automotive will not be one of the initial industry verticals served by the $40m Dillon Inland Port, the knowledge SCPA gained through developing Greer for automotive and its track record of growth provided a blueprint for expansion that the port authority could follow.

“Obviously, Greer was a new concept when we implemented it. We learned from Greer how to build an inland port, and Greer has more than met our volume targets. Had it not been successful, I don’t think we would be looking at doing another facility,” Newsome said. “I hope that there are one or two more such locations within our state where we can do something similar. I think that it’s important for a port to build out its rail-based intermodal network if it can. I think we are learning that short-haul intermodal rail can be very attractive.”

Meanwhile, growing and future automotive production in the region could one day look to the port. Volvo Cars is currently building a new car factory close to Charleston, South Carolina while Mercedes-Benz is building a new van plant close to North Charleston.

The Greer inland port handled more than 103,000 cargo moves in 2016 – the third year of operation at the facility – with BMW accounting for less than 50% of the cargo moving through it. Discount retailer Dollar Tree, Eastman Chemical and Adidas are among the companies that have become key contributors to the overall freight mix in Greer.

According to Newsome, initial projections for Dillon are in the range of 40,000 cargo moves in the first year.

Newsome anticipates the port will be operational in March 2018. Harbor Freight Tools, which has its largest distribution facility near the Dillon facility, is expected to be the initial anchor tenant.

SCPA chose the site and land for the port – which totals around 160 acres (65 hectares) – with an eye on future growth and there is a vast amount of available land in the area for the new manufacturing plants, Newsome pointed out.

“I don’t think that Dillon will ever be the size of Greer. But who knows?” he said. “Given the geography of this area and its proximity to a freeway, this is an ideal location for manufacturing.”