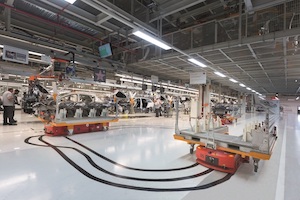 Spanish carmaker Seat has joined the Alastria consortium to work on the development of blockchain-based products.

Seat is the first carmaker to join the network, which now involves 70 major businesses and institutions, including banks, telecom providers, energy companies and universities.

Seat’s president, Luca de Meo, said that being a part of the Alastria network opened up new possibilities for developing services and products with complete confidence and security. “We are the first carmaker to join this ecosystem, which comprises the country’s major companies,” he said. “We are convinced of the importance that blockchain technology will have in the future, and for this reason we want to be involved from the outset.”

The carmaker said it would begin testing the technology in its production department and study how Industry 4.0 applications could improve standard procedures.

This latest move into the field of blockchain technology builds on Seat’s earlier collaboration with Spanish telecoms provider Telefónica on the application of blockchain and predictive analytics to improve the tracking of parts shipments to the Martorell assembly factory in Spain. Telefónica is also a member of the Alastria consortium.

The carmaker said it was investing to adapt its processes to the digitalisation of the automotive industry in an effort to make it more efficient, flexible and agile.

Join supply chain and automotive IT experts from BMW, Daimler, GM, Magna, NIO, Pirelli, Samsung and many more at The Supply Chain Conference, as they strategise and outline practical steps for future automotive supply chains, on 19-21 March 2019 in Atlanta.