The modern vehicle seat is a sophisticated item and suppliers require very specific supply chain strategies of their own to stay competitive. Automotive Logistics provides an overview of this fast-changing sector 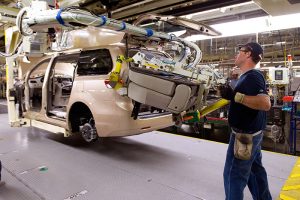 The automotive seating and interiors business is a tough, competitive marketplace that requires high capital costs and a strong, local connection to OEM assembly plants. Thus, while the supply of fully assembled seats is concentrated among a few suppliers in each region, their highly regional operations mean that the seating market is in many ways fragmented.

Furthermore, understanding the seating supply chain requires a deeper analysis than seating assembly locations, as the supply chain for other components, from foam and frames to leather and other trims, is considerably global and complex.

That the sector is undergoing important changes can be seen at the market leader, Johnson Controls Inc (JCI), whose seat business is currently being spun off into a separate company, Adient, set to go public in October this year. JCI/Adient has approximately a third of the global market, significantly more than any other supplier, although this varies widely by region. In Europe, Faurecia, JCI and Lear account for over three-quarters of the seat market, with the balance coming from the local operations of Japanese suppliers Toyota Boshoku and TS Tech, Dymos of South Korea (which supplies some seats to Hyundai-Kia) and in-house seat production at BMW, Mercedes-Benz and Volkswagen Group.

As elsewhere, seat manufacturers have followed OEM assembly plants in Europe, localising production in eastern Europe, for example. While most of Faurecia’s plants have been in France, it has opened more facilities in eastern Europe, including foam and mechanisms plants in Poland and numerous seat assembly plants close to its customers across the continent. JCI’s European operations have been centred in Germany and Spain, but it also operates plants in the UK and eastern Europe. Lear’s traditional European focus has been in Germany and Italy, though it, too, has expanded in the UK and to the east. 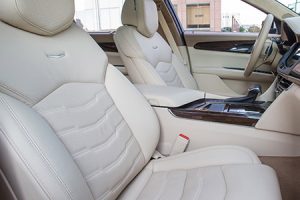 Position of comfort: the modern seat is actually quite a complex product

While in Europe it supplies seats mainly for light commercial vehicles, in North America Magna dominates the light vehicle market alongside JCI and Lear, all three supplying products for cars and light trucks, including SUVs. Faurecia (which has grown in the region thanks in part to acquisitions) and Japanese suppliers’ local operations account for less than 20% of the North American market.

In Japan, meanwhile, Tachi-S, Toyota Boshoku and TS Tech are the key suppliers, alongside JCI, which acquired Ikeda-Bussan back in 2000.

The Japanese companies’ joint ventures in China – which number around 16 for Tachi-S, almost 20 for Toyota Boshoku and 10 for TS Tech – supply the Chinese operations of their European, Japanese and US customers, while in India a number of independent seat companies such as Bharat Seats, Harita Seating and Krishna Maruti are still active, although Lear and Magna, in particular, have a growing presence there.

Increased vertical integrationSeats are complex assemblies, with many key components traditionally coming from tier two and tier three suppliers. In many cases, sourcing among lower tiers is directed by carmakers. 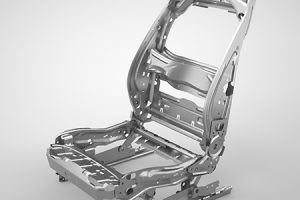 At Volkswagen’s plant in Chattanooga, Tennessee, for example, Chattanooga Seating Systems (CSS) – the Magna seating division that supplies the plant just-in-sequence (JIS) from an adjacent supplier park – is directed to use sources ranging from vinyl suppliers in Canada to leather providers from Argentina, Addam Prewitt, production and logistics manager at CSS, said recently – although logistics remains the seating manufacturer’s responsibility.

Financial pressures have led some seat companies to increase vertical integration to retain control over costs and margins. An early example of this was JCI’s 2010 acquisitions of German seat mechanisms suppliers Keiper and Hammerstein; in 2015, meanwhile, Lear acquired US leather supplier, Eagle Ottawa.

However, important tier two suppliers still exist: Germany’s Brose is a preferred supplier to several vehicle companies, for example – notably Jaguar Land Rover, for whom it delivers frames to Lear.

Seat foam, a key part of the finished seat, has interesting supply chain arrangements of its own. In Europe, Faurecia and JCI have tended to make much of their own foam, as well as sourcing from independent suppliers such as Canadian-owned Woodbridge, which has over 50 sites globally supplying both seat assemblers and car manufacturers; German firm Fehrer (now part of Aunde); as well as Copo, which operates in Spain and Brazil. At Lear, almost all of its foam was outsourced in Europe, in contrast to its North America operation, which has tended to produce most of it itself. Recently, however, Lear changed tack, opening a UK seat foam facility in Sunderland in 2011 to supply JLR and Nissan.

Independent foam suppliers have not given up on this market, however. Among them is Bridgestone, best known for its tyres, which in late 2015 announced a new plant in New York to supply a variety of US customers beginning from late 2017.

Seat cover cutting and sewing has also experienced increased vertical integration. Traditionally, this kind of work was subcontracted to independent suppliers in low-cost locations, such as eastern Europe or north Africa. But recently, some manufacturers have taken this back in-house. In November 2015, Magna opened a factory in Allende, Coahuila in Mexico, which will be its main regional cut and sew operation. In Europe, Lear has opened two seat cover cut and sew plants in Gostivar, Macedonia and Lasi, Romania to supply both its own operations and those of its competitors.

Plant location issuesThe complexity of modern seat assembly and the number of options involved means vehicle companies want seat assembly to be geographically close to their car plant, since it allows them to specify how many seats they need and in what order they should be loaded onto delivery vehicles in the minimum timeframe. As elsewhere, this policy tends to increase inventory holding for the supplier, but these extra costs can be reduced by savings on transport and other costs associated with goods in transit.

European car plants have long taken this approach to seat production, but the US has been slower to adopt such practices. GM, in particular, had been somewhat behind the curve in terms of locating seat plants close to its assembly plants. However, more recent plans to cut its annual North American logistics spending has involved relocating seat assembly plants, not least the new Faurecia seat assembly plant close to GM at Wentzville, Missouri, which produces the Chevrolet Colorado and GMC Canyon. 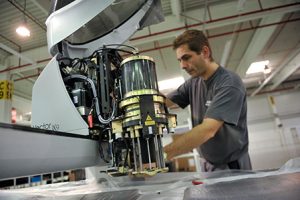 In Europe, such arrangements are widespread. At Nissan’s Sunderland plant, two nearby seat suppliers deliver on a sequenced just-in-time basis: Lear provides the seats for the Juke and Leaf, while JCI supplies the Qashqai crossover SUV.

JCI has other JIT seat facilities next to Volvo Cars in Gothenburg, Seat in Barcelona and at Volkswagen’s Palmela, Portugal plant; the latter is run in conjunction with Schnellecke Logistics and delivers a range of interior components along with seats.

Elsewhere Volkswagen uses Faurecia to ship seats into the Bratislava plant in Slovakia; as demand has risen here, this operation is moving to a new facility in Zahorie, around 60km from the Volkswagen plant, partly because pressure on labour supply close to the factory means suppliers have to locate further away than would otherwise be desirable. Foam for these seats will probably come from Faurecia’s foam facilities in Poland, around 360km away by road.

Another good example of seat foam supply comes from Lear in the UK, which in 2015 completed an increase in capacity at its Sunderland foam facility to supply both Nissan and Jaguar Land Rover. Capacity has doubled to 600,000 seats a year; for Nissan, Lear ships foam a few miles to its seat assembly plant, while the foam for JLR models is shipped to Lear assembly plants closer to JLR’s factories that supply the XF and F-Pace, in particular. XF seats are assembled in Lear’s Coventry factory with the foam coming from Lear in Sunderland and also an independent supplier in Manchester. The Sunderland-to-Coventry contract started with nine trailers a week and is increasing more than five-fold as production of the XF and F-Pace ramps up over this year and next.

Efficient seat logistics also involves efficient parts flow management within the seat assembly facilities. Lear Coventry, for example, installed new carousel and dispatch conveyors around two years ago to improve the factory’s efficiency in producing seats for the F-Type sports car. Finished seats are loaded onto a conveyor holding up to 36 sets of fully assembled, sequenced seats for delivery by truck to Jaguar in Castle Bromwich. The conveyor transfers them directly into the truck from which they are automatically unloaded at the other end, close to the point of use on the assembly line. 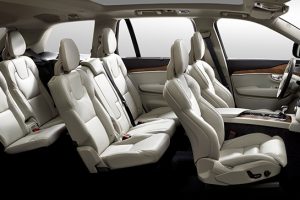 Seven-seat set in the Volvo XC90

Adopting new strategiesAs seat assemblies have become more complex and feature-laden, so seat companies have had to develop increasingly sophisticated supply chain strategies. The variety of seat options and number of sub-suppliers have both increased steadily at all vehicle companies in recent years, adding to the pressures on the supply base. And just because the seats are assembled for vehicle factories doesn’t mean they don’t have highly complex inbound supply chains themselves. In Chattanooga, for example, around 87% of Magna’s supply chain comes from Mexico.

In this light, JCI recently set out a number of new objectives and requirements of its supply base for 2016 and beyond. At its 2016 Global Automotive Supplier Expectations Day, held in late 2015, JCI told its suppliers they needed to adopt a number of new initiatives in the logistics area during the current financial year. These included implementation of RFID returnable container tracking in North America (from packaging specialist Surgere) and adoption of a new container management system in Europe.

As seat makers continue to adopt such strategies and become more sophisticated in their approach, the scene looks set for yet more radical change in the supply chain; and those who don’t keep up may not be sitting comfortably at the wheel for much longer.