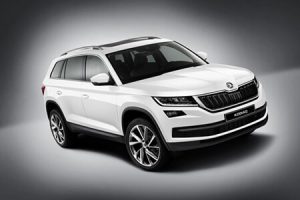 Skoda is reintroducing volume assembly in Ukraine, making it the first foreign carmaker to produce cars in significant numbers there since 2014.

The VW-owned company has boosted production at the joint-venture facility it set up with Atoll Holding Group subsidiary Eurocar back in 2001 at Solomonovo, just 2km from the borders with Slovakia and Hungary in the Uzhhorod district.

While originally designed to make 45,000 vehicles a year across a range of VW Group brands, including Skoda, Audi, Seat and VW, production was dramatically cut as a result of economic conditions in the country, and a mere 4,000 were made in 2016.

At a ceremony to mark the restart of VW Group production last month, general director of Eurocar, Igor Tsarenko, said his company had plans to assemble 7,500 vehicles this year, of which 1,530 would be Skoda SUVs, split between the Kodiaq (902) and Karoq (628) models. These will be made from complete knockdown (CKD) kits imported from the EU, with parts localisation in Ukraine averaging between 11-13%. There are plans to increase this output annually.

The first 100 vehicles will be supplied to the national police service.

There are several carmakers operating in Ukraine, including ZAZ and Bogdan, but Eurocar is currently the only one making passenger vehicles in the country, according to Tsarenko.

Skoda said the same quality control system would be implemented at the new Ukraine assembly line as was used at its other plants across Europe.

As it lowers trade barriers, Ukraine is looking to protect its national automotive industry against lower cost imports. The country’s prime minister, Vladimir Groisman, recently submitted several draft bills to parliament aiming to impose additional import duties on finished vehicles and components, in an effort to stave off any dumping of cheap imports on the market.

These bills, if adopted, should help an industry suffering badly from the economic crisis that hit the country in 2014. Ukrainian automotive industry association Ukrautoprom recently suggested that strong vehicle imports from the EU had killed off investment in the domestic automotive industry.

Ukraine’s automotive plants released only 8,000 light passenger vehicles in 2017, while domestic sales there reached 75,000 units, according to official statistics. In 2012, by comparison, Ukrainian plants made 76,000 finished vehicles in a domestic market of 217,000 units.

Sales and production in Ukraine last year were slightly higher compared to previous years. Against this background, local logistics provider BLG ViDi Logistics has invested to expand its fleet of car carriers with seven new units, stating that it perceived a shortage of transport capacity on the domestic market.