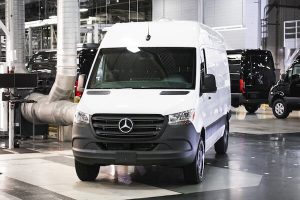 Production of the Mercedes-Benz Sprinter van range has now begun at an expanded assembly plant in North Charleston, South Carolina, after a two-year construction period.

Plans for the $500m Sprinter-focused expansion to the North Charleston site date back to March 2015. The investment there has included a body shop, paint shop and final assembly area.

More than 900 workers are now employed at the plant. That number is set to grow to 1,300 by the end of 2020, with an estimated additional 600 jobs being created at suppliers in and around North Charleston, according to the OEM.

The site previously assembled semi-knockdown (SKD) kits from Germany, which it had been doing since 2006. “With the new plant and the made-in-USA vehicles, the business area will be able to serve the growing demand of North American customers more economically and significantly reduce delivery times in this market,” the company said.

Production logistics services will be provided by Kuehne + Nagel, as announced last year.

Autonomous transport vehicles, which can travel more than 60km in a shift, are controlled through the South Carolina plant’s IT system and the use of radio frequency identification (RFID) technology.

“The associated transponders, incorporated into the factory floors, receive the necessary driving commands. The vehicles can also use Bluetooth to communicate with one another and coordinate automatically, thus guaranteeing smooth traffic flow at all times,” the German OEM stated.

Among the greatest transformations at the plant is reduced paperwork thanks to RFID, which means the position of a specific component can be pinpointed precisely any time with contactless, automatic identification, according to Mercedes-Benz.

“This information allows employees in logistics and production to feasibly adjust to process changes,” said the company. “Moreover, quality assurance personnel can ascertain that the correct part has been installed in the correct vehicle.”

Compared to conventional processes, RFID technology has made it possible to eliminate several steps in documentation, such as manual scanning of barcodes. “This not only saves time and money, but also reduces the number of potential sources of error,” the company said.

Mercedes-Benz says its employees are still the most important factor in terms of production quality, however.

“Due to the diversity of body types, powertrain concepts, body lengths, tonnages, cargo space heights and equipment options, the new Sprinter is available in more than 1,700 variants. Every employee has to learn around 900 individual process steps in a specific order to enable them to build the new Sprinter,” the company said.

Digital tools are used to make this process more efficient and sustainable. “In assembly, employees can use an on-screen approach similar to that of a computer game to familiarise themselves with procedures and components. Previously, training for assembly work was conducted purely on pre-production vehicles,” said Mercedes-Benz.

Frank Klein, head of operations at Mercedes-Benz Vans, said the new plant was “a valuable asset that completes our global production network”.

Just as production was getting underway at the North Charleston plant, Mercedes-Benz took the precaution of closing the plant in the face of Hurricane Florence, which is expected to hit the area later this week.