The sharp decline in growth in Brazil over the past several years has come at the same time as a number of manufacturers have invested or expanded operations in the country. Among those carmakers was China’s Chery. In 2010 it was riding a wave of expansion in Brazil and a strong real favourable to imports. This led it to invest around $400m to build a 150,000-unit capacity plant in Jacareí, in São Paulo state, which opened in September 2014. It was the carmaker’s first assembly plant outside of China except for those plants assembling from knockdown kits. 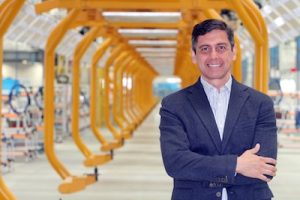 Since then, “almost like a joke, everything in the market changed,” said Orlando Moral, operations director at Chery Brazil, speaking at this week’s Automotive Logistics South America conference in São Paulo.

Brazil is in its third year of falling vehicle sales, with declines in light vehicle output of more than 20% year-to-date compared to 2014. Brazil’s central bank interest rate (the SELIC) has risen from 8.65% in 2010 to 14.15% to combat high inflation. The real, meanwhile, has fallen by more than half, from 1.761 reais to the dollar in 2010, to around 3.8 reais today.

For Chery, the change in economic conditions has posed significant risks to its original business model. For example, the drop in the local currency alone strains the company’s supply chain cost base, given that it began operations with about 70-75% of its content imported from China.

“You can imagine the impact for a business. It’s huge. This is what is making us hibernate for a period,” said Moral, who worked previously for around 30 years for the Volkswagen Group.

However, despite the downturn, Chery continues to invest in Brazil, including plans to localise production of an updated SUV model and a Brazilian R&D centre over the next two years. In the meantime, a new supply chain and logistic network has been an important strategy for reducing waste and excess cost in production and supply. “It’s fundamental to have agility and creativity to eliminate the waste and correct the routes to sustain the business,” Moral said.

Redrawing Brazil’s supply lines
Moral outlined how Chery has had to quickly re-engineer its inbound parts and assembly footprint. Chery initially started output in Brazil with three operations: the main assembly plant at Jacareí; a separate facility nearby under fully owned Acteco powertrain division, which assembled engines from imported parts from China; and a parts warehouse in the town of Salto that stored material from Brazilian suppliers, about 180km away. Material was imported through the port of Vitoria, in the state of Espírito Santo, some 800km from the factory.

This structure was in part set up for tax and incentive benefits, including from Brazil’s Inovar-Auto scheme, which places higher import duties on light vehicles but removes them for carmakers that meet local production and investment criteria. However, under the current circumstances in Brazil, managing separate sites no longer made sense, even with certain tax benefits, said Moral. The Acteco factory had high rental costs, separate labour and a significant amount of inventory, for example. Today, Chery has integrated the powertrain assembly into the main Chery plant in Jacareí, eliminating rental costs, reducing labour as well as stock and transport.

Chery has also made a number of other important logistics changes, including shifting its import supplies to the port of Santos in São Paulo state, which allows for faster customs clearance and reduced logistics costs.

Chery has also implemented further lean logistics and production concepts that allowed it to remove the Salto warehouse, and will allow it to build new models on the same assembly line in Jacareí. Other areas of focus have been in visual management, qualifications training, quality standards and procedures, and environmental management. Moral said that these standards led to a good gain in productivity overall.

Although localisation levels are currently around 30%, Chery plans to increase this to 70% over the next two years, in part by introducing a supplier park next to the factory. Moral hopes that the park will encourage tier suppliers, including those from China, to localise production near to the plant.

For logistics, Chery has also outsourced its in-plant handling and line-feeding activities to BMS – a joint venture between BLG and Mosolf – as a lead logistics provider. Its outbound yard management and vehicle distribution is outsourced to outbound provider, Brazul.

In the near future, Chery will take control of its inbound logistics and implement milkruns. Currently, deliveries to the factory are the responsibility of suppliers. “It is normal to start this way, but we plan to change this. We have to get out of the crisis a bit first and have a critical mass of volume so this plan can be feasible in a modern way with milkruns,” said Moral.

Moral added that although Chery will “hibernate” somewhat over the next couple of years, the company plans to come back strongly, increasing production to 150,000 cars a year by 2018, when it hopes to reach 3% market share in Brazil.

“We will take all measures possible to survive a few years until the situation improves. We have to be agile, creative and eliminate losses to survive in this changing market,” he concluded.