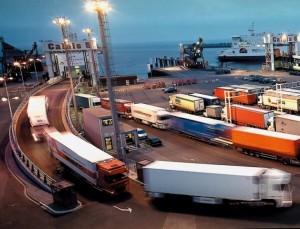 The port of Calais is once again subject to disruption for trucks bound for the UK following strike action by port security workers that began early in the day on October 13th.

Truck check-in posts have been blocked by strikers, who are demanding better working conditions and requesting that more personnel are deployed at truck check-in posts. This is because workers say they are having to deal with an increasing number of migrants in the check-in area at the port.

The main approach road to the port has been closed by French authorities, and no freight is entering the port. No port processors are available either, so trucks are not being checked.

Hundred of trucks are stuck at the port, the East Port is full to capacity, and there are queues stretching down the motorway in France.

La Voix du Nord de Calais has reported that around 50 foreign truck drivers are planning to demonstrate near the port also.

This is not the first time this year that services between France and the UK have been disrupted. Over the summer, traffic flow through Calais was disrupted for weeks. Along with the migrant problem in Calais, freight and passenger services have been affected by industrial action by the Syndicat Maritime Nord union. The union went on strike earlier in July in response to the transfer of vessels from MyFerryLink by Eurotunnel to DFDS following Eurotunnel’s takeover of the former SeaFrance operation.