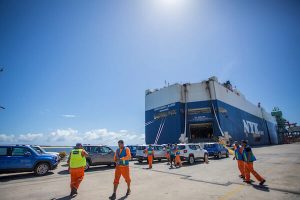 A public consultation has begun over plans for a new concession to run the finished vehicle terminal at the north-western Brazilian Port of Suape. The National Waterways Transport Agency (Antaq), the port authority currently running the terminal, plans to issue a tender for the concession in early September. The consultation will run until September 14.

The port authority is also consulting on plans for construction of a second container terminal at the port. Both projects form part of the government’s Partnership Investment Programme (PPI).

Following a public hearing and an evaluation by the National Audit Office (TCU), scheduled to take place by the end of the year, the government plans to issue both tenders in early 2019, with contracts placed later that year.

While the container terminal will be a greenfield development, the finished vehicle terminal concession will be a simple transfer of existing infrastructure to a new operator, although with the expectation that the new tenant will expand the supply of services. Investment of around 7.5m reais ($1.9m) will be required.

Currently, both Jeep and Fiat export vehicles through Suape, including the Renegade and Toro models, while Vauxhall, GM and Toyota all import finished vehicles via the port.

Finished vehicle port developments in South America will be under discussion at this year's Automotive Logistics South America summit which takes place on November 28 in Sao Paulo, Brazil