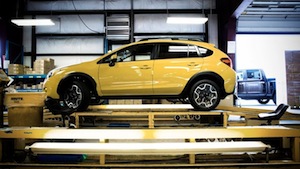 Subaru of America’s latest $140m investment to expand its facility in Lafayette, Indiana, which is underway and due for completion next year, will increase annual capacity by 100,000 units to 450,000. To support the increase in outbound volumes, Wallenius Wilhelmsen Logistics (WWL) has just announced it will double its workforce to 500 and expand its own provision of services for the carmaker at the site, which include pre-delivery inspection (PDI), accessorisation, yard management and rail loading.

WWL also manages vehicle import processing at the US port of Brunswick in Georgia for Subaru.

Subaru of Indiana Automotive (SIA), which is owned by Fuji Heavy Industries, will increase existing production of the Legacy and Outback models at Lafayette, as well as adding the new Impreza model this year. The Impreza compact sedan and 5-door are currently built only at Subaru’s plants in Japan. In addition, SIA will add a new three-row SUV crossover model to replace the outgoing Tribeca. That vehicle will go into production in 2018.

Subaru also makes the Toyota Camry at the Lafayette plant but Toyota has confirmed it will end Camry production later this year and shift output to its Georgetown, Kentucky plant.

The latest plan comes on top of a $400m expansion of the engine and stamping line sections of the plant, which is also in process and will enable SIA to begin Impreza production by the end of this year. Taken together, since 2013 the company has committed to invest $540m in the plant. It will mean a further 1,200 jobs at the plant on top of the 3,800 people already working there.

The Indiana Economic Development Corporation has offered SIA up to $7,650,000 in conditional tax credits and up to $250,000 in training grants based on the company’s job creation plans.