Of the many disruptions the pandemic has caused, the chain reaction of delays and spiralling costs in container global container shipping must have been one of the hardest to deal with. The delays in the Suez Canal were just the icing on an already unappetising cake.

The disruption in global shipping was a real chain reaction, according to Philip Damas, managing director and head of supply chain advisors at Drewry Shipping Consultants, and the ripples are unlikely to completely smooth out before the end of the year. 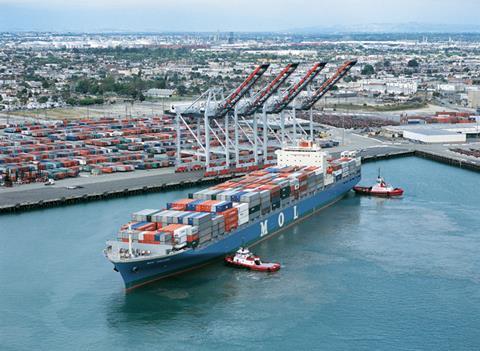 Even then, the relationship between the automotive industry and shipping lines will probably never return to the way it was pre-pandemic, he warned during a session of Automotive Logistics & Supply Chain Europe Live this week.

When China shut down its production in the first part of 2020, shipping lines responded by cancelling hundreds of sailings to protect themselves from massive overcapacity. However, volumes rebounded much more quickly than anticipated and there was not enough capacity to meet demand.

“And that’s where the system really got completely disorientated and disturbed because of a large bounce in traffic volume which nobody had expected,” Damas explained.

Crippling congestion
In the second half of the year, global industry made a big push to replenish volumes, causing a lot of volatility and leading to crippling port congestion. From the third quarter of 2020, port efficiency dropped dramatically and ships were spending way too much time in port, lengthening supply chains. Shipping lines responded by sending fewer ships, compounding the problem even further.

On top of all that came a severe shortage in containers, which tended to get stuck in ports because of rollovers and a shortage of truck drivers. Damas said that in December 2020 it could take as long as 100 days for containers to go from their origin in Japan to Europe and back, which is twice as long as normal. 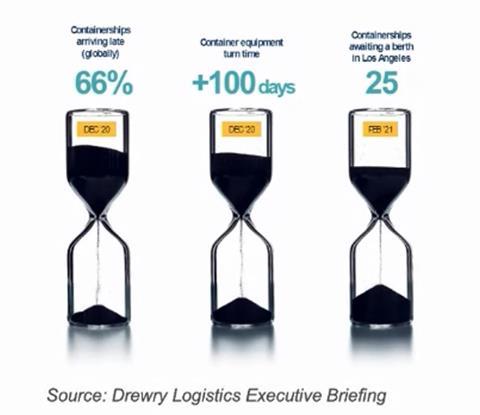 All this conspires to create delays and skyrocketing costs for logistics providers, and importers and exporters, both on the sea and in emergency freight. Damas illustrated: “One of our customers in the auto parts industry… had to spend over $100m on air freight because the ocean sector was not coping.”

At the same time, spot rates for containers went up to five digits, while contract rates went up by more than 50% in the year to April, according to Drury’s data.

Structural shift
There is light at the end of the tunnel but Damas has seen market volatility during the pandemic cause a permanent shift in the way the shipping lines operate.

In terms of light, as trading patterns continue to normalise, as Covid restrictions lift and the workforce returns to normal working, the backlog will start to clear. At the same time, nearly all the ships that were put into lay-up have been re-activated, restoring a lot of the capacity. As a result, Damas sees the shipping difficulties lasting for another six to eight months, with substantial improvements from the third quarter. Order books at shipbuilders are also bursting, particularly for more environmentally friendly vessels, although the long lead times for those mean that most of the capacity shortage will have subsided before they are delivered.

However, while the real capacity crunch will eventually end, the industry and the pull that automotive has in it, will look different than it did pre-pandemic. Damas said that carriers will no longer be willing to tolerate operating with a lot of overcapacity, as they have been doing for a long time. They will have a little bit of spare capacity for flexibility, but will manage it with cancelled sailings and capacity management.

“This is why we are saying that in 2022 we will see fewer disruptions and a better balance between supply and demand, but we will not see a return to chronic overcapacity,” said Damas. “We think there’s been a structural shift.”

The upshot is that the exceptionally high spot rates seen during 2020 and 2021 will fall, but that contract rates are not likely to return to pre-pandemic levels. Instead, Drury expects a 40% difference in contract rates for containers between 2019 and the forecast for 2022.

In this changed market, the automotive industry won’t be able to count on preferential treatment, either.

“I think [the automotive industry] is losing priority,” warned Damas. “Typically, for example in transatlantic trade, the car producers were one of the top steady base cargo providers, but in the current market, where it’s effectively a seller’s market, we are not seeing the OEMs getting as much power in the relationship and as much priority.

According to Damas, automotive shippers will have to pay more and have to find ways to convince the shipping lines that their cargo is important, which is a complete reversal of the previous relationship.

The full session will be available to view on demand soon, and offers further insight on the impact of the Suez Canal blockage and how the industry should deal with future disruptions.