Porsche on track for southern China 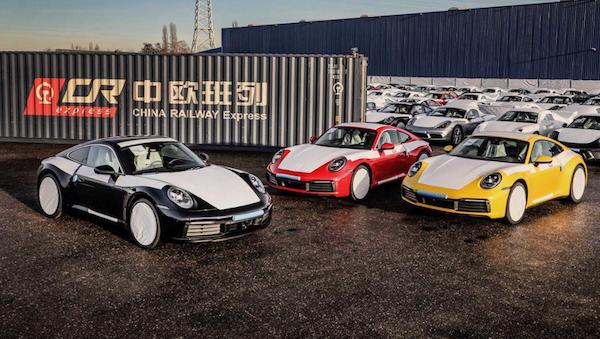 Porsche has begun using rail for containerised vehicle shipments to China as a supplementary mode to the volume deep ocean moves it makes out of Germany. The change shortens the vehicles' delivery time by more than three weeks, according to the German luxury carmaker.

The company has confirmed it is working with Hellmann Worldwide Logistics and China Railway Express on the shipment of the vehicles.

Following a successful trial, Porsche will use rail to move 11% of its factory-new models between Germany and Chongqing in south-west China, equal to 8,800 vehicles from across the Porsche range.

The 11,000km route, which takes 20 days, travels eastward through Poland, Belarus, Russia and Kazakhstan to Chongqing. From there, the new cars will be delivered to regional dealers in their containers by road.

The ocean route by comparison covers 10,000 nautical miles or 18,500km and calls at the ports of Guangzhou, Shanghai and Tianjin. The overall journey from factory to the Porsche centres in China on this route takes 50 days.

Last year China accounted for 31% of all Porsche deliveries, the company’s highest-volume individual market with around 80,000 sports cars sold. They were all transported by sea.

However, Porsche is no stranger to delivering finished vehicles by train as it has traditionally relied on rail for logistics in Europe.

The overland China-Europe route is part of the Belt and Road Initiative (BRI), China’s infrastructure-led development of central Asia with connections to South Asia and the Middle East as well as Europe.

See the forthcoming edition of Finished Vehicle Logistics magazine for a focus on the use of containers for finished vehicle shipments.