Parts shortages and supply chain disruption are to blame for poor vehicle manufacturing results in the UK for the first half of 2022. At the same time, however, the production of battery electric vehicles (BEVs) has increased to a record level, supported by investment in UK manufacturing worth £3.4 billion ($4.1 billion) between January and June. 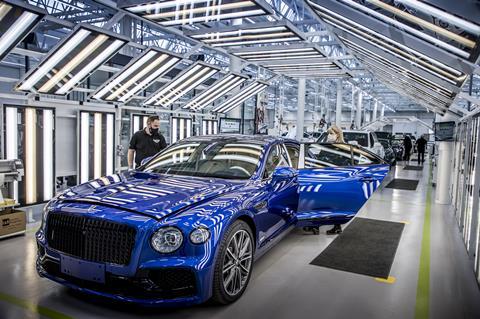 Bentley is investing £2.5 billion into the manufacturing of electric vehicles in its Crewe plant in the UK

According to the latest figures from the Society of Motor Manufacturers and Traders (SMMT), passenger car manufacturing in the UK fell by -19.2% in the first half of 2022, with just more than 403,000 vehicles produced. That means nearly 95,800 fewer vehicles were built than over the first half of last year, roughly a third down on pre-pandemic production levels. However, output has picked up in May (+13.3%) and June (+5.6%) compared to the same months in 2021.

Drop in exports
The UK has exported fewer cars overseas in the first half of the year, down -24% and equal to a loss of almost 99,400 units compared to the first half of last year. The UK exports 78.6% of the cars it makes and Europe remains the largest export region for UK cars, accounting for a 60% share, but exports to Europe dropped by -10.6% between January and June.

Deliveries to the US, the UK’s second biggest export market, dropped by -56% and the SMMT said the closure of “a major UK plant in 2021” had significant impact. Honda closed its Swindon plant in the UK, with the last vehicle produced in July last year. Vauxhall also stopped making the Astra at its Ellesmere Port factory in April this year.

However, the SMMT said the main cause for the decline in production remains the shortage in the supply of key components, notably semiconductors, a situation made worse by the lockdown in China and disruption caused by the war in Ukraine. Carmakers and their suppliers have been working hard to relocate manufacturing of essential components, such as wiring harnesses. Nevertheless, disruption to the global supply chain means the UK is likely to produce at least 113,000 fewer cars this year than originally forecast back in March. UK car production is now expected to hit around 866,000 units for the year and output is not expected to climb above 1m units again until 2025. 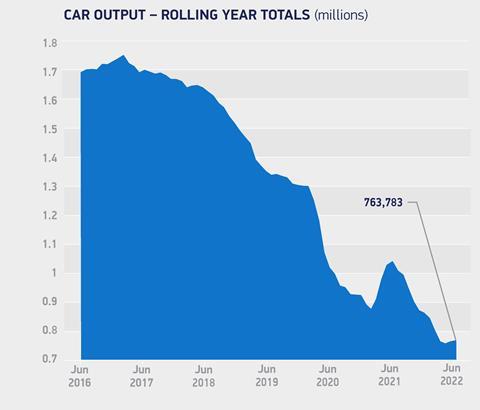 “Car manufacturers have been suffering from a ‘long Covid’ for much of 2022, as global component shortages undermine production and put supply chains under extreme pressure,” said Mike Hawes, chief executive of the SMMT.

Disruption to the delivery of containerised goods is also a challenge for the automotive industry at the moment, something not helped by congestion at the short-sea border crossings but, according to Hawes, most manufacturers have now moved away from short-sea crossings to avoid being vulnerable to bottlenecks. It remains to be seen what the impact will be on inbound parts movements through the UK’s biggest container port at Felixstowe now that unions have voted in favour of strike action in August. The forecast is for widespread supply chain disruption.

Investing in electric
Among other pressures affecting UK car production are the “significant structural and model changes” affecting the automotive industry. At the same time however, the seismic switch from the production of combustion-engine vehicles to BEVs provides grounds for a more positive outlook. BEV production increased by 6.5% to around 32,300 units in the first six months of 2022. That was helped by record 44% increase in the production of zero-emission vehicles in June.

It was also helped by investment of more than £3.4 billion in the first half of 2022. Bentley began the year by announcing it was investing £2.5 billion into the manufacturing of BEVs in Crewe, with the first products off the assembly line by 2025. Jaguar Land Rover is also investing around £1 billion in BEV production at its Castle Bromwich site. Battery maker Britishvolt has also just announced it will invest £200m in a UK Midlands test facility. That comes on top of its planned £3.8 billion plant, which is being built in Cambois on the site of the former Blyth Power Station.

Looking ahead, Nissan is investing £1 billion in a flagship BEV hub around its plant in Sunderland. The EV36Zero project will create EV manufacturing ecosystem, involving battery maker Envision AESC and Sunderland City Council.

However, to make the most of the opportunities that the transition to BEV making offers the UK, Hawes said the country’s underlying competitiveness needed protecting.

Carmakers are facing steep and volatile energy price increases. There is no price cap on energy costs for business in the UK and, according to Hawes, they are around 59% higher than the EU average. That is going to cost the UK automotive industry an additional £90m in energy costs alone this year and means it is less competitive compared to other countries.

“Sky-high energy costs, non-competitive business rates and skills shortages must all be addressed if we are to build on our inherent strengths and seize the opportunities presented by the dash for decarbonised mobility,” said Hawes.

Supply chain visibility
In terms of greater resilience there is also a need for carmakers to have better visibility of their supply chains for certain important components. While recent disruption has been to some extent unforeseeable, such as the Covid pandemic or Russia’s invasion of Ukraine, there remains a lack of transparency along the supply chain, meaning mitigation strategies are less effective than they potentially could be when a crisis arises. It is part of the reason the automotive sector is still suffering a shortage of semiconductors following the first lockdowns of the Covid pandemic.

The relationship between vehicle and semiconductor manufacturers has never been a direct one, which may explain the lack of transparency, and automotive only accounts for 15% of the market for the electronic chips.

“[Automotive] is not the biggest beast in the jungle, where normally in the supply chain it would be taking in the majority of supply,” said Hawes. “Carmakers’ ability to have any influence over the semiconductor manufacturers is limited.”

What the supply chain disruption over the last two and half years has done is focus OEM attention on which parts make production more vulnerable if there is an arrest in the supply chain and that includes semiconductors.

Semiconductor security
Now OEMs are looking to secure more semiconductor manufacturing capacity dedicated to automotive through direct supply assurance agreements, such as the one BMW recently signed with Inova Semiconductors and Global Foundries. The agreement guarantees the BMW the supply of several million microchips per year.

Carmakers are also looking at more vertical integration, such as Ford, which announced a strategic collaboration with Global Foundries late last year to secure semiconductor supply for its current vehicle line-up. The agreement involves joint research and development for feature-rich chips.

Those more sophisticated microchips are likely to be in higher demand as BEV production increases and the car becomes a more digitally connected product.

There are anything between 1,500 and 3,000 microchips in a vehicle these days but, as well as looking for more capacity to supply those electronic parts, carmakers are also looking at how they can change the vehicle architecture, according to Hawes.

“Can you change the amount of chips required in the way you construct the vehicle so it has more of a central processing unit, rather than disparate microchips spread around the vehicle? And then how does that involve cost and impact operations?” he said, summarising the current thinking amongst carmakers.

Competitive after Covid
At the end of the day, however, the UK still has no dedicated semiconductor strategy in comparison to other markets. For example, the EU is proposing that 20% of its $917 billion Covid recovery fund goes to funding digital infrastructure, including the microelectronics industry. The US also recently approved $52 billion in funding for semiconductor manufacturing. There is no equivalent strategy in the UK and the SMMT said that clear government action was needed to ensure the UK was not left behind.

Looking ahead, it is going to be more important for UK vehicle makers to have localised production of the components that go into making a BEV because tougher rules of origin legislation around EVs is being brought in from 2024. Between then and 2026, the minimum reginal content (RVC) of a BEV will be 45%. That moves up to 55% in 2027. If those rules are not met then the finished passenger vehicle is subject to a tariff of 10%.

Localised production will also improve the security of supply and just-in-time production, and minimise the carbon expenditure from the transport used to ship parts in. UK vehicle makers will need 1m batteries by 2035, plus 300,000 hybrid batteries, according to the SMMT. That represents a major opportunity for UK-based battery factories to win the business. Localised battery production would reduce the transport costs and carbon output from logistics by shortening the supply chain.

It is equally important for the UK to secure free (and fair) trade agreements (FTAs) in the wake of Brexit. The UK automotive industry is having to accommodate higher costs associated with the import and export of vehicles, parts and components since it left the EU. According to Hawes, there is still a raft of regulation to be implemented for the UK to be an independent country and that could potentially incur further cost for the industry.

That makes it all the more important to ensure that automotive interests are safeguarded when negotiating new FTAs. All eyes are now on the proposed FTA between the UK and India, which now has a deadline for final agreement on October 24 this year, the festival of Diwali. The UK is hoping to end tariffs on vehicles as part of the deal and open up a sizeable export market. According to Hawes, prudence and scrutiny will be crucial to the success of the deal as far as the automotive industry is concerned.

“We know they are deferring automotive to the back end of that negotiation and there is a lot of focus on tariff agreements, which goes hand in hand with rules of origin,” said Hawes. “We support free trade but it has to be fair, and quick deals don’t always go into the necessary detail.”