Audi is recycling the plastic packaging used to deliver sensitive components to its Neckarsulm assembly plant in Germany and using it to produce 3D-printed tools for vehicle production. 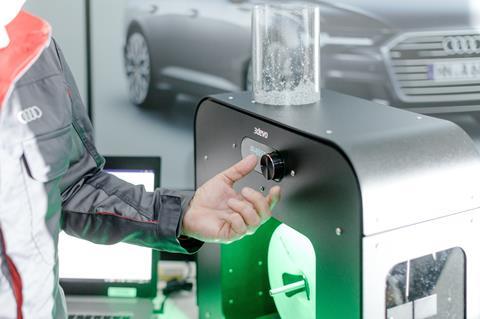 According to the carmaker, the blister packaging, which is used to deliver such parts as sensors and speakers, is collected and sorted by type before being shredded and granulated to dry it out. A filament maker then heats the granulate up to 450°C and extrudes it in the form of plastic filament. That filament is the raw material for the 3D printers that the Neckarsulm team uses to produce precision-fit assembly aids for vehicle production.

Audi is working closely with the Dutch start-up 3devo, which supplies the filament production technology, on the project.

It forms part of Audi’s Mission: Zero programme, which includes a range of initiatives designed to minimise the impact of Audi’s production on the environment.

“At the Neckarsulm site, numerous measures and projects such as exclusively sourcing green power, a pilot system for a closed water cycle in the factory, and the aluminium closed loop in the press plant, are already helping to protect the environment and conserve resources,” explained Achim Diehlmann, project manager of the Mission: Zero programme and head of corporate environmental protection at the site. “The 3D filament-printing pilot project is another example of how we are always developing new solutions to move closer, one step at a time, to our ultimate goal of achieving a completely sustainable automotive production process.”

Audi has been using 3D-printed tools for production at Neckarsulm for five years. The carmaker said the aim was to give employees the exact assembly aid they needed as quickly as possible. The plant currently prints more than 160 different tools, including pushers, to make it easier for production workers to attach clips to the car body or assembly aids that can be used to precisely attach the four-ring Audi badge to the rear of the vehicle.

“In this pilot project, we’re not only focusing on speed, ergonomics, and safety, but also solidly on sustainability,” explained Eitrich. “The first major milestone was technical proof that the process is viable in a general sense – in other words, that we can produce printable filament from existing plastics.” 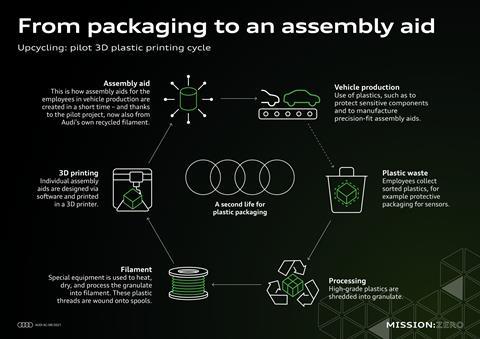 In the wider context of its Mission: Zero initiative, Audi has been working with suppliers to reduce packaging waste by optimising several component packages, with the result that it has saved almost 31 metric tons of non-recyclable packaging at Neckarsulm.

In addition, plastic film waste that accumulates at the factory has been used to produce trash bags since the beginning of the year, which are then used directly at the site. The company said this allows it to recycle around 15 tons of plastic waste each year.

Furthermore, new virtual planning methods are helping to save resources. In one application, Audi virtually designed part of the special containers used to transport sensitive components for the Audi e-tron GT for the first time. This VR application, piloted at the Neckarsulm site, is now in use throughout the group and helps conserve resources previously used for container prototypes.