Mitsubishi Fuso Truck and Bus (MFTBC) has revealed the latest efforts to cut carbon emissions from its plants and supporting logistics functions. 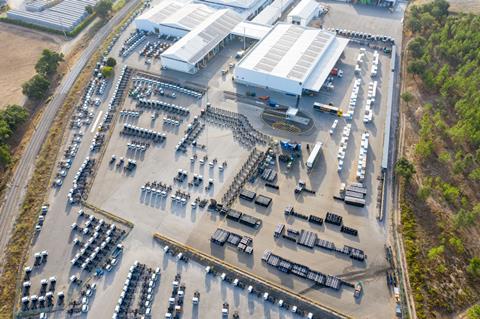 The vehicle maker, which his part of the Daimler Trucks and Buses group, said its Tramagal plant in Portugal will be carbon-neutral by the end of next year. That will be helped by converting the entire internal logistics and warehouse fleet to electric vehicles. Those moves are part of a wider programme of cutting carbon from logistics operations globally.

The Tramagal plant, which makes the Fuso light-duty Canter and all-electric eCanter trucks for the European market, is aiming for a 50% cut in its carbon emissions this year.

As well as the use of EV fleets for warehouse and other logistics functions, MFTBC is contracting green electricity for the Tramagal plant and increasing on-site solar power. The company is also reviewing applications for green hydrogen production, with the support of solar power, to gradually replace natural gas consumption.

MFTBC said it had also started quantifying carbon emissions generated from the inbound delivery of materials and parts from its suppliers, and in the delivery of its vehicles outbound to customers.

The company is also continuing carbon reduction plans at three of its plants in Japan – Kawasaki, Toyama and Nakatsu – and said it will make them completely carbon neutral by 2039.

“Climate change is a topic that needs to be addressed and solved worldwide,” said Hartmut Schick, president and CEO of MFTBC. Therefore, the electrification of commercial vehicles cannot be achieved by manufacturers and customers alone. Inter-industry alignment and governmental support will also be vital in establishing effective transformations throughout logistics and the supply chain. Collaborative actions between public and private sectors are essential to succeed in this major challenge.”

Carbon neutrality roadmap
Among the measures being taken to reduce logistics emissions, MFTBC is revising the number of trucks used to deliver components and optimising the modes of transport used, as well as adjusting cargo utilisation and routes. It is also installing electric forklifts for internal logistics. The company said it was creating a carbon neutrality roadmap for its logistics operations.

In terms of procurement, the company is working in line with Daimler Supplier Sustainability Standards and the Daimler Trucks’ procurement guidelines. As part of those guidelines MFTBC is promoting climate protection and sustainability among its suppliers both within the companies and in their own sub-tier supply chains.

MFTBC gave the example of using the CDP Climate Protection Survey, which aims to establish greater transparency in environmental standards across the supply chain. Daimler Trucks works with organisations such as CDP (formerly the Carbon Disclosure Project).

In 2020, key suppliers were invited to participate in an annual survey to report their environmental impact, including their level of CO2 emissions. Up to now, suppliers representing more than 70% of the annual purchasing volume of the Daimler Truck and Bus business have been asked to participate, with the scope expected to increase in 2021 and support the effort to reduce CO2 emissions throughout the automotive supply chain.