Suzuki looking to export cars from India to Russia 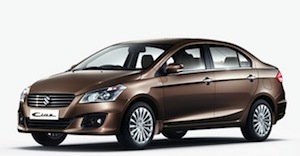 “Our promising Russian model lineup includes cars that are currently assembled in India. Therefore, we are working on this issue in terms of logistics, delivery time and price,” said Irina Zelentsova, sales and marketing director, Suzuki Motor Rus.

Suzuki is looking at bringing the Ciaz (pictured) and Baleno models to the Russian market. However, company representatives have not disclosed the planned export numbers, only saying that it will depend on the general economic situation in the country, as well as currency fluctuations.

“We are considering the possibility of selling them [Ciaz and Baleno] in Russia,” Zelentsova said. “The economic situation will tell us when we should bring these cars on. We are a little sad that the variety of models in the Russian market is still small, but what is happening now with the currency, leaves its mark,”

Suzuki currently delivers the Vitara and SX4 models to Russia from its Hungarian plant, and the Jimny and Grand Vitara from Japan. The vehicles arrive at the port of Ust-Luga in Leningrad Oblast, where Suzuki has a large warehouse. The company has no plans to change its logistics for these deliveries.

“Our logistics plans meet our demands in terms of quality, size and time limits,” Zelentsova said. The proposed units arriving from India will also go through Ust-Luga port, before being sent to dealers.”

In 2015, Suzuki had problems with its internal logistics in Russia. Due to falling sales, the company lost its contracts with a number of Russian partners, in particular automotive dealers Laura and Fenix Motors.

“We are opening new dealerships to replace those that, for whatever reasons, have left the brand,” said Zelentsova. “In St Petersburg, for example, we had a very strong team of dealers but, unfortunately, we have to replace the losses now. Therefore, today we are not talking about the expansion of the dealerships network in Russia, but only about its preservation.” Zelentsova added that there would be no changes to internal logistics this year either.

Suzuki still could build plant in Shushary in Leningrad Oblast to meet demand for new models on the Russian market but admitted that the timing was not ideal.

“For the moment, this issue is frozen,” said Keiichi Sumida, CEO of Suzuki Motor Rus CEO. “The Russian market is currently going through hard times. We see that the price of imported cars is differing largely from the price of domestically produced cars. At the same time, there is no actual need in the Russian plant. In the current situation, we are trying to negotiate with production plants on special prices for us.”