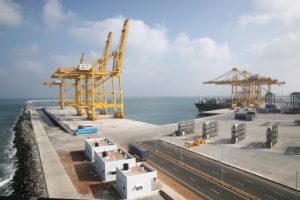 L&T Ports, which operates at the Indian port of Kattupalli, has begun handling the export of finished vehicles for the first time.

The port, which is located 35km north of Chennai, is now the third maritime facility in the Chennai area to handle finished vehicles. The two existing facilities are Kamarajar Port at Ennore and also Chennai Port. The arrival of Kattupalli therefore consolidates the state of Tamil Nadu's position as a regional automobile hub.

L&T Ports, which is a division of L&T Shipbuilding, is a joint venture company between Larsen & Toubro and the state-run Tamil Nadu Industrial Development Corporation. At Kattupalli it can accommodate up to 3,500 export vehicles at any given time. Furthermore, being located away from residential development, the port is easy to reach.

Unlike other Indian ports, Kattupalli is almost unique as an Indian port in not handling any kind commodities generating large amounts of dust, which gives it a certain advantage over rival ports that also handle finished vehicles.

Ashok Leyland, Daimler, Hyundai and Renault-Nissan all have manufacturing plants in suburbs around Chennai. Some 60km further north, Kobelco also has a manufacturing plant at Sri City, near Tada, in Andhra Pradesh, and is therefore expected to become a major client of Kattupalli.

K Venkatesh, a director of L&T Shipbuilding, revealed that the port is in discussions with other leading OEMs in respect of long-term agreements to handle finished vehicles exports.

K-Line, Höegh Autoliners, NYK and Eukor are all reported to be talking to the port. They are particularly interested in a proposal put forward by L&T Ports to further expand its parking area to accommodate up to 10,000 vehicles, depending on market demand.

A number of automotive companies currently using Kattupalli to handle their containerised parts are also said to be evaluating the port to handle the import and export of finished vehicles. Toyota, Ford Nissan and Kobelco already use container facilities there to export auto parts and components.