The race to deliver 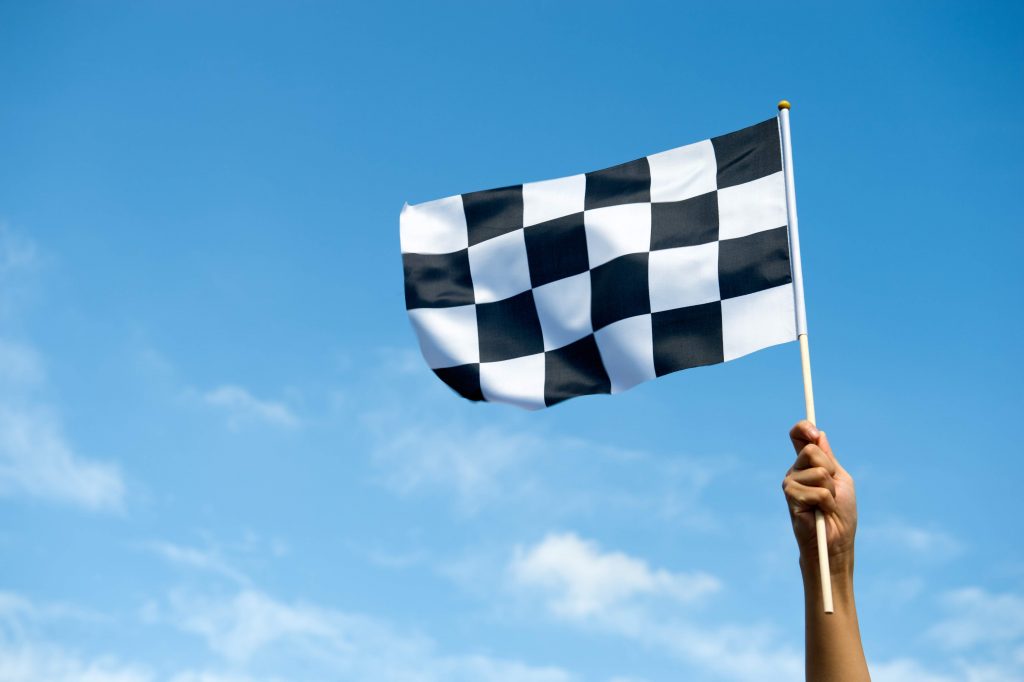 When the chequered flag is waved at any Formula 1, Formula E or World Rallycross race, a vital logistics operation revs up to ensure teams reach the next starting line

Motor racing is a sport that captivates audiences around the world, but how many of the millions of people who love Formula 1, the 60,000 spectators who packed into London’s Battersea Park this past summer to experience the fast-growing electric version, Formula E, or the dedicated followers of the fast-and-furious World Rallycross, have ever given much thought to another race against the clock that is happening behind the scenes?

Between the waving of chequered flags and popping of champagne corks, sometimes stretched between countries or continents, entire fleets of vehicles must be moved, along with repair equipment, spare parts, oils and even catering. It may not be in the high volume or density seen at a car factory or vehicle-handling port, but the stakes are high should something go wrong, including disappointing millions of fans or putting huge sums in prize and advertising money at risk.

While the product might be something glamorous in racing and technology, the remit for logistics providers serving motorsport has largely the same, everyday objectives as other segments of the industrial automotive supply chain: safe and timely delivery, as well as waste and cost reduction, using the most effective transport mode, returnable packaging and routing.

Formula 1: A village of people

Arguably the most prestigious motor racing sport, Formula 1 is a complex logistics operation because of its tight turnarounds, globe-spanning locations, safety and regulatory procedures, and sheer variety of cargo. 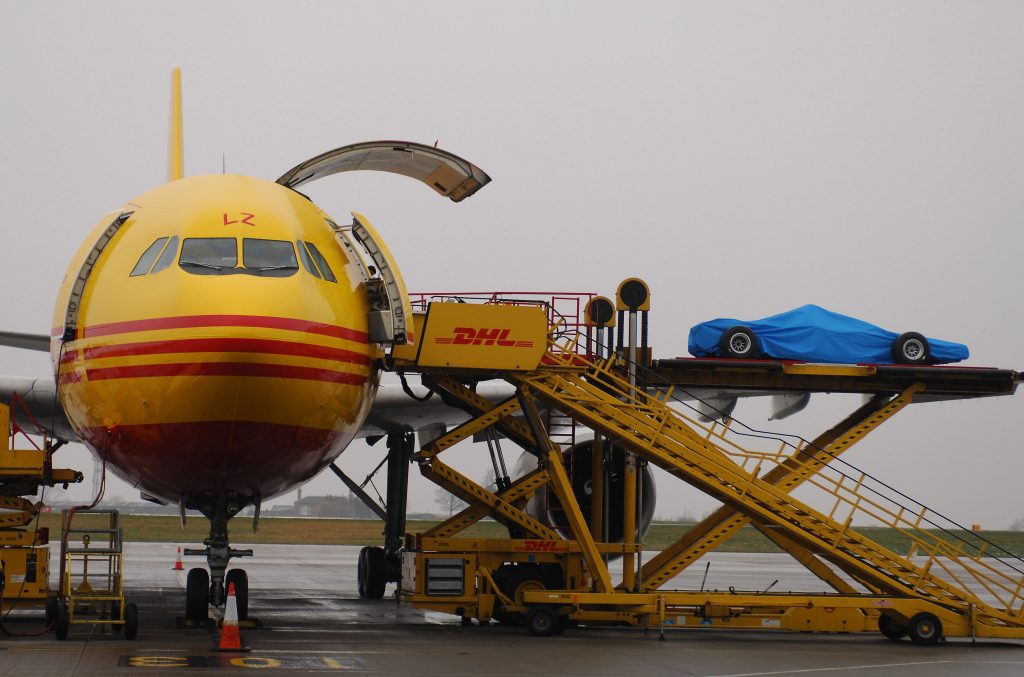 DHL, which handles much of the international logistics for both Formula 1 and Formula E, its all-electric counterpart, follows a special procedure to move cars, transporting them to airports in customised trucks, lashed securely to air cargo pallets to prevent movement. “The cars are placed on raised blocks to prevent damage,” says Fathi Tlatli, president of automotive at DHL Customer Solution & Innovations.

It’s not just the car that needs to be at the race, including parts and equipment, but also catering, advertising kit and many other supplies. “There’s a whole village that needs to be moved,” he says.

Teams, organisers and suppliers also carry huge amounts of their own equipment to each race to ensure the same set-up in each country, and to avoid using unreliable or unfamiliar local equipment. That includes special packaging used to cover each Formula 1 car. “Due to sensitivity, cost, importance, and confidentiality of these parts, teams prepare the specialised packaging,” Tlatli says.

Radius Management & Logistics UK has been working with Formula 1 since 2011, providing specialist staff, vehicles and equipment, and helping teams to move their own IT equipment, tools, hospitality furniture – anything required to ensure reliable operations and consistent brand image wherever they race. “We even transport the trackside sponsorship signage along with large format printers, to ensure consistency,” adds operations manager Matt Sinclair. 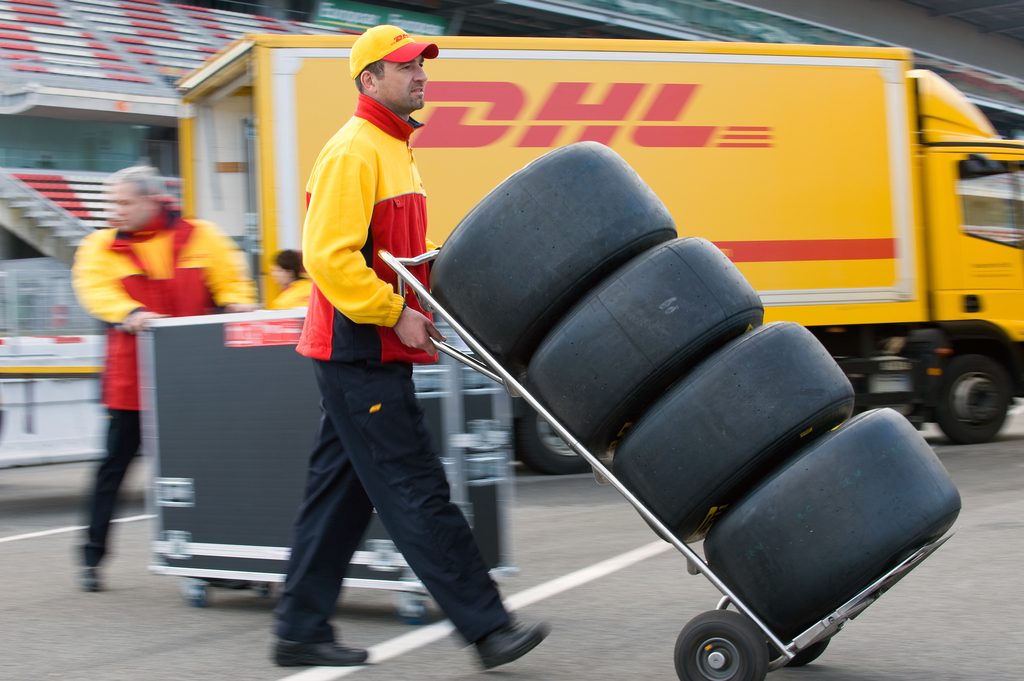 Transporting huge quantities of related goods, including food for the whole team, raises specific challenges in some countries. “We have specialised teams that know the documentation required in each country inside out,” Tlatli says. “There are also some agreements between the FIA (International Automobile Federation) and host countries in some cases, and DHL is aware of all this legislation.”

The sky’s the limit

Of the 19 ‘Grand Prix’ races in the Formula 1 season, several take place within very short time frames. Because of set-up and reassembly requirements, logistics teams have just days to work across countries and time zones, resulting in high costs, including a considerable amount of air freight.

Matt Sinclair says that in the case of back-to-back events, freight may have to be ready to fly as early as midnight on race day. Cars will be partially stripped down, with fuels and batteries removed or packaged accordingly, to allow them to be moved by aeroplane. “Race cars, IT infrastructure, and race control and production hardware are stripped down and readied for air freight. These items are sent by air due to them being one-off items, or of high value,” Sinclair explains.

While the need for speed can necessitate air freight, lower cost or readily available hardware is usually purchased in duplicate, and shipped by sea; so, too, are catering, hospitality, and office items. Within Europe, most items are shipped by road or express vans. “At European races, we dismantle hospitality units and technical trucks and drive them directly to the following event for set-up,” Sinclair says.

Of course, unforeseen events or natural disasters can ruin even the best plans. DHL has a risk management tool to monitor transport situations. “It helps to actively map all risks related to a supply chain, then reorganise accordingly,” Tlatli says. “We have quality centres with a total view of all kinds of situations happening all over the world.” 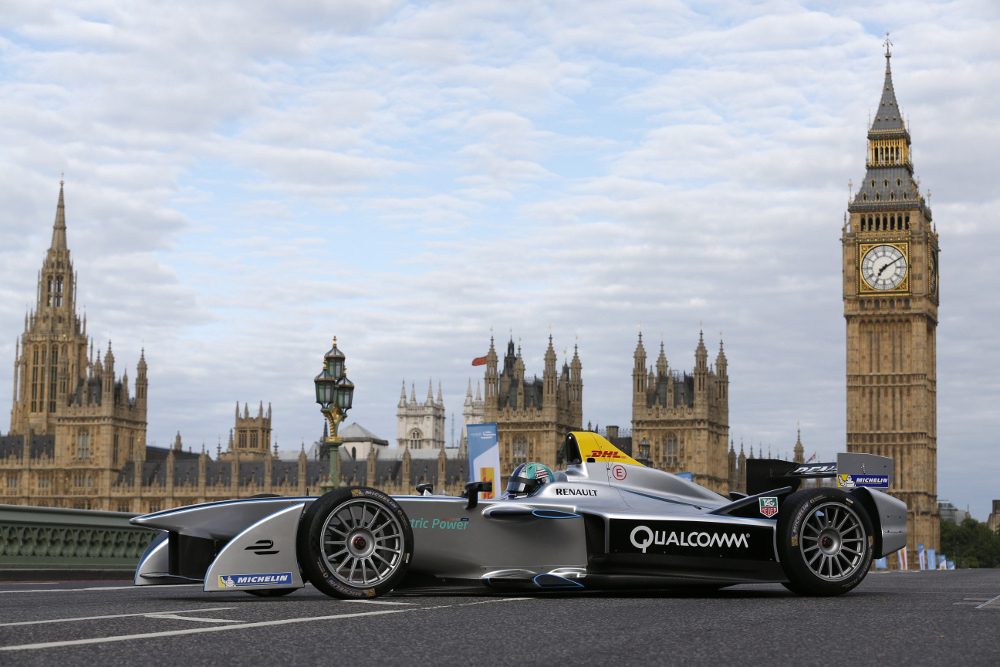 Where possible, parts that must move by air are sent using team members as on-board carriers, on charter planes – or even sometimes by tapping into the wealth surrounding the sport. “Sometimes staff will hand-carry smaller items on commercial flights, or use regular air freight for larger items,” Sinclair says. “In Europe, we use smaller vans to make overnight runs, and if all else fails, teams might even make use of someone’s private jet that’s on its way to the event.”

Despite the relatively high amount of air freight for Formula 1 logistics, there is a rising focus on lowering costs and emissions. “We continuously evaluate what our clients transport to events, and which mode of transport is used for items,” Sinclair says. “We have successfully reduced the amount of air freight being used since 2011, by using a combination of sea freight and warehousing. This requires more planning and equipment, but has seen a vast reduction in fuel per item, per season, and a significant reduction in costs for our clients.”

Although Formula 1 uses multimodal transport to some degree, it has a way to go before catching up to the new, ‘green’ kid on the block, Formula E. “It’s different because Formula E is measured in terms of the sustainability of logistics. We have much more multimodal activity, using a lot of trains and ships,” says Fathi Tlatli.

Formula E has been designed with sustainability in mind, from the cars to the technology, right down to the logistics. “Formula E has optimised routing so there are regional clusters and two sets of race equipment, so you have fewer intercontinental movements,” adds Tlatli. “We have an Asia cluster, then South America, North America, and Europe.”

Formula E is also helping to develop technology to increase the speed of charging electric batteries. “The faster you can charge, the more you will be able to increase the use of electric cars,” says Tlatli. To him these details are part of the strategic importance of Formula E, with some of the races acting as forums that could improve the view of electric vehicles in markets like China. 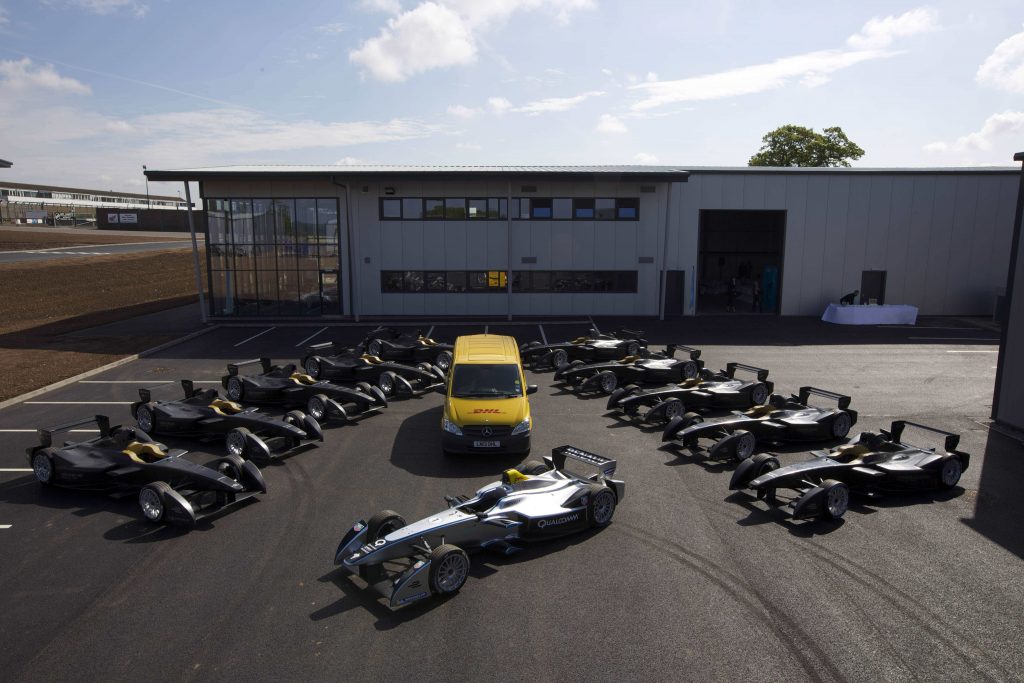 Formula E has some different logistical challenges to its fossil-fuelled cousin, including the transport of electric batteries and parts, some of which are designated as hazardous material and require special procedures. “There is a considerable amount of additional documentation, and eventually we got it right,” Tlatli says.

Keeping the batteries at an optimum temperature is one important consideration, as overheated batteries can lose charge permanently. Also, halfway through Formula E races, drivers swap cars with a new battery, driving further logistical demands for vehicles and equipment.

Other than the batteries, there are significant amounts of electronics that need to be moved. “If you look at an electric car, they have up to 300 connections, and diagnostics is a very important area,” Tlatli adds.

As the popularity of Formula E grows, so might the number of races. However, such growth won’t be a logistical problem, particularly since the circuit holds two sets of equipment across the regional clusters, insists Tlatli. “So you don’t have to move everything from one continent to another. Any new races will also be added into the clusters, so there will be enough time to move all the equipment in a sustainable way.”

World Rallycross, another racing event organised by FIA together with promoter IMG Motorsport, has not typically had the freight pressure seen at Formula 1. However, this year it had to use air freight for the first time to facilitate the move from Gothenburg, Sweden to Montreal, Canada for its seventh round, and then to Hell, in Norway for the next round. 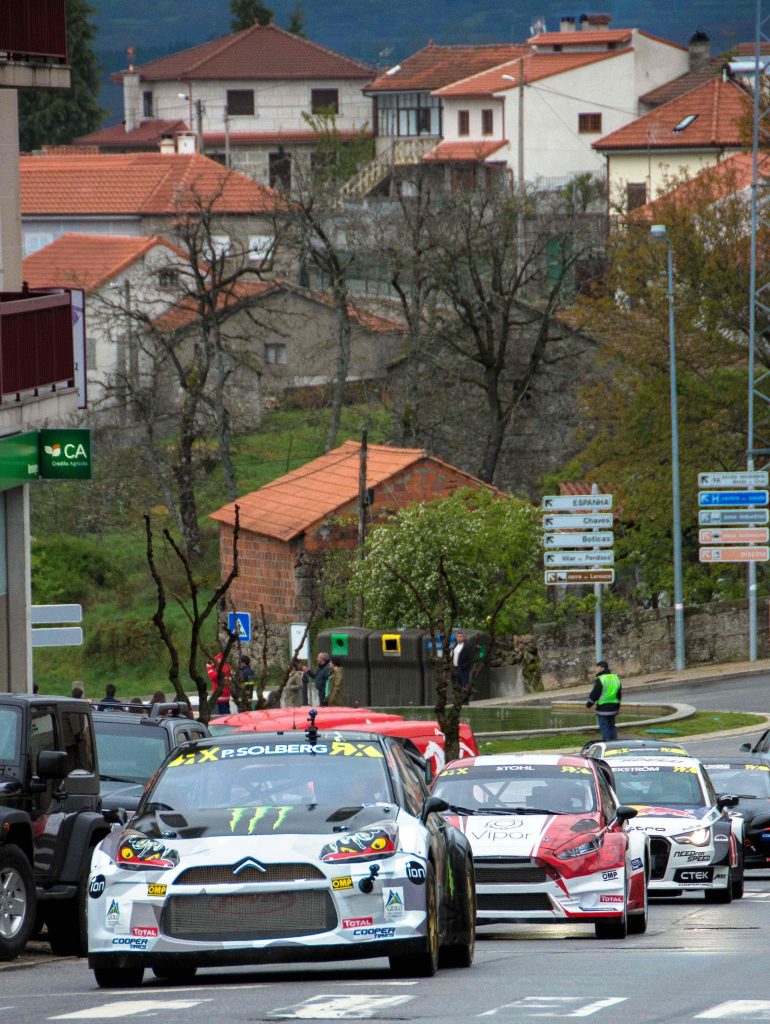 According to Dominic Watson, operations manager for marine leisure and events at GAC – the official logistics provider for World Rallycross – the move involved a special charter plane to transport 20 cars. “It’s an exciting development, but one which requires meticulous planning and adherence to tight deadlines,” Watson adds.

European Rallycross teams have their own trucking logistics arrangements in place, but GAC still works closely with team managers and series organisers in case they need special parts or equipment flying to venues when necessary, or need any customs paperwork completing.

The post-race procedure and vehicle transfer is similar to others, as cars are jet-washed, dried, packed and shipped as complete units. “As in most motorsports, protective packaging is made of Kevlar and hard plastics. Custom-made flight cases will be used for air freight,” says Watson.

Like the other circuits, there are also gearboxes, wheels and a selection of spares that need to move. “It’s a fast and brutal sport in which there’s a fair amount of damage to panels and bumpers, so we carry plenty of those too,” Watson explains.

Despite the bumps, the mechanics have managed to recover and repair all vehicles so far. “As part of our contingency and crisis planning, we have taken into consideration the possibility that special transportation might be required in the case of an accident, and will reach out to our global network in order to obtain the necessary equipment,” Watson says.

For long-haul destinations, sea freight is the preferred option for World Rallycross where possible, but contingency planning must be in place. “Both GAC and IMG have carefully worked out contingency and crisis management plans, ready to swing into action immediately if the need arises. GAC has the advantage of a global network,” Watson says.

Safety and security also need to be monitored closely. “When the containers are waiting to load onto the vessel or aircraft we know they will be in a secure area. The cars and flight cases will be safely placed in a 24-hour, guarded warehouse,” Watson says.

As with the most businesses, cost remains the driver for most customers when selecting transport modes and LSPs. Where GAC can choose, fuel efficiency is a priority, but in many cases it must rely on what is available in the market and engineer routes in its IT system. “For road transport we try to maximise truck utilisation and combine loads to achieve the best possible cost-per-tonne ratio,” Watson adds.

While no one would dispute that speed is essential to competing in any racing sport, winning usually comes from a balance of safety and pace, plus skill and the best possible equipment in the pit. The logistics for motorsport bears similar characteristics: logistics providers must keep up with the pack until it is necessary to put the pedal to the metal, and accelerate freight. However, none of that can be done without consideration for protecting the cargo. Finally, without the right supply of spare parts and equipment, few drivers could even manage to finish a race, let alone win it.