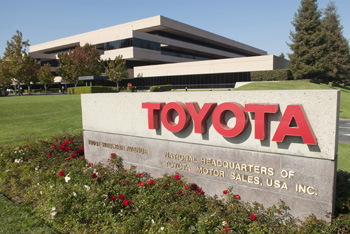 Toyota’s decision to build a new headquarters in Texas for its North American corporate functions will bring together for the first time much of the region’s top management for inbound, outbound and spare parts logistics. Toyota’s chief executive and logistics managers expect that this proximity will allow for better collaboration and integration between sales, manufacturing and supply planning.

Toyota announced this week plans to build a campus in Plano, North Dallas that will house three separate North American headquarters for sales and marketing, manufacturing, and corporate functions that are currently based in California, Kentucky and New York, respectively. Toyota has said that most moves would not take place until late 2016 or 2017 when the Plano campus is ready, although some functions will move as early as this year to a temporary space.

The relocation will affect around 2,000 employees at Toyota Motor Sales USA (TMS) in Torrance, California, which a TMS official has confirmed includes the head offices of Toyota’s outbound logistics division, Toyota Logistics Services (TLS) and its service parts distribution, North American Parts Operations (NAPO). Another 1,000 positions are expected to move from Toyota Financial Services (TFS) in Torrance to Texas, although this not expected to happen before 2017.

Yet another 1,000 employees from Toyota Motor Engineering & Manufacturing (TEMA) in Erlanger, Kentucky will go to Texas, including Toyota’s central logistics control and production control departments, according to TEMA logistics control manager, Brian Bold.

Some employees at Toyota’s corporate office in Manhattan will also move to Texas. [sam_ad id=6 codes='true']

Meanwhile, Toyota is planning to expand its engineering centre near Ann Arbor, Michigan, including relocating around 250 direct procurement positions there from Erlanger so as to be closer to engineers, as well as to the heartland of the US supplier base in the Midwest. Bold confirmed that indirect purchasing, which includes inbound and material handling purchasing, will move to Plano. Another 300 production engineering positions from Erlanger (none of which in logistics or production control) will move about 90km south to Toyota’s largest North American assembly plant in Georgetown, Kentucky.

Operating units in Canada, Mexico and Puerto Rico are not affected by the move, neither are the carmaker’s manufacturing plants, regional offices and logistics distribution centres. A TMS source has also confirmed that a number of important TLS and NAPO sites will remain in California, including parts distribution centres in Los Angeles, Ontario and San Roman, as well as TLS field locations, notably its vehicle terminal at the port of Long Beach. Total employment in the state following the move is expected to drop from 5,300 today to 2,300 after the move, according to a source at TMS.

Toyota has said that the move to Texas would have no impact on its relationship with Gulf States Toyota, a private distributor responsible for sales, vehicle processing and logistics, as well as spare parts logistics to Toyota and Scion dealerships within the state (but not for Lexus). Toyota also has a private distributor, Southeast Toyota, for sales and logistics in Georgia, Alabama, Florida, North and South Carolina.

Currently, the North American headquarters is for joint location only, with no plans to combine TEMA, TMS and TFS into one company. However, Toyota’s North American chief executive, Jim Lentz, has not ruled out eventually creating a single corporate entity. Elsewhere in the world, Toyota has eliminated the separation in business entities between sales and production – which had previously been a legal requirement for foreign brands in the US – including in Europe and India. 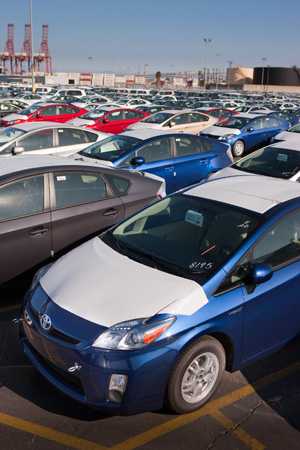 Moving closer to plants than ports
The shift to Texas is “the most significant change we’ve made to our North American operations in the past 50 years”, according to Lentz, who took over the top job for Toyota in North America last year. Toyota has had a base in the Los Angeles area since the 1950s – and its current location since 1972 – close to its primary entry port from Japan at Long Beach. Its largest NAPO operations have also been based in the area, while it has operated a small component plant at Long Beach since the 1970s.

Other Asian brands also have their US sales headquarters in southern California, including Honda just next door to Toyota in Torrance, as well as Hyundai and Kia (along with their logistics affiliates, Glovis America) and Mitsubishi. Nissan was located nearby until 2006.

Since 1996, TEMA has consolidated a number of management functions in Erlanger, which is close to the Georgetown plant and somewhat central between Toyota’s other original US plants in the Midwest.

However, in many ways Toyota’s centre of gravity across North America has shifted east and southward, with major manufacturing sites in Kentucky, Indiana, Mississippi and Texas. While California remains an important market for Toyota, not least thanks to the success of the Prius hybrid model, the carmaker has continuously increased its proportion of sales away from imports and towards North American production, not least to avoid exposure to the Japanese yen. For example, Toyota will build its first Lexus model in the US starting next year, with the Lexus ES at Georgetown. It already builds most Lexus RX 350 wagons for North America in Canada.

In total last year Toyota sold 2.5m vehicles in North America (with more than 2.2m in the US); it built 1.85m vehicles in the region.

Although Toyota opened its first-ever US assembly plant in 1984 in California – the NUUMI joint venture with General Motors in Fremont – it closed the plant in 2010 following the economic downturn.

Nissan also moved its sales and distribution headquarters from California in 2006 to combine management with manufacturing in Smyrna, Tennessee. Last year, Honda moved some managers out of its sales headquarters in California in areas such as IT, human resources and financing to be integrated with the carmaker’s manufacturing and engineering base in Ohio. That move, however, has so far not resulted in any changes or moves for Honda’s logistics.

Closer operations rather than lower costs
Toyota has cited lower costs in Texas among the justifications for the move, including cheaper real estate and zero state taxes; a Texas state investment fund has also offered Toyota $40m as part of the move. However, Lentz and Toyota management have downplayed cost cutting or reducing staff numbers in deciding the move. According to Lentz, the company’s new headquarters will allow it to increase headcount, while relocation or retention packages will be offered to all employees who choose to move to Texas or stay with Toyota until the planned move. The company is not yet able to estimate how many managers are likely to leave Toyota as a result of the move.

For logistics and supply chain, as with other corporate functions, the major benefits are expected to be the possibility of finding efficiencies between the company’s currently far-flung locations.

"If I can have supply and demand sitting next to each other, with information in real time, and collaborating with each other, that makes us a stronger player" - Jim Lentz, Toyota North America

“The relocation and centralisation of the logistics functions will allow for continued progress to be made in the alignment of our supply chain elements, while increasing our capability to collaborate with finished vehicle and service parts logistics in the future,” Bold told Automotive Logistics.

TEMA, as revealed in an interview last year with Automotive Logistics, had already been increasing its central coordination of logistics across Toyota’s assembly plants, including in areas such as route engineering and packaging. Bold said the move would not affect or change this agenda. “The move will not change the overall direction that Toyota production control and logistics control is taking to strengthen our ability to actively manage and align our supply chain elements,” he said.

“We have production engineering in Erlanger, but the demand side of ordering products is in California,” Lentz said. “So when we get weekend sales reports, and Camry has a great weekend, that report gets fed eventually to production control, who may look at it in the next couple of weeks. But [the factory] has no sense of what’s happening in the marketplace. If I can have supply and demand sitting next to each other, with information in real time, and collaborating with each other, that makes us a stronger player.”