Toyota part 5: take me to the water 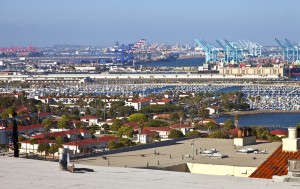 In the conclusion to this five part series on Toyota's North American service parts distribution, the company reveals how applying the Japanese principle of Genchi Genbutsu helped the carmaker to manage through recent labour disputes at the port of Long Beach

An example of how TPS principles characterise business decisions as well as supplier relations at NAPO can be found in how it has managed the disruptions at the port of Long Beach, where overseas service parts arrive before being transferred to the parts centre in Ontario, California. In this instance it is less about just-in-time movements or continuous flow, and more about dealing with problems in person to build consensus to find answers.

Like its production arm and many other companies, during disruptions Toyota flew service parts in by air to avoid disrupting supply to distribution centres, dealers and distributors. Safety stock was also drawn down at the parts and distribution centres. However, even with more than 30 ships moored in the harbour, there were containers unloaded at the port – it was just that the slowed operations meant few were leaving the port quickly. Toyota executives knew that their material was among the containers stacked eight or nine high. The question was how to get to it?

Genchi Genbutsu, another core Toyota principle, literally means ‘to go and see’. According to Thornton Oxnard, responsible for corporate logistics, it refers to the need to visit the people and places where operations occur and to work together with partners to find a solution. And when it came to Genchi Genbutsu in this case, Toyota had an advantage, since the port of Long Beach is less than 10 miles (16km) from NAPO’s offices at the TMS headquarters in Torrance – half an hour away even with traffic on the 405 freeway.

Just by travelling this short distance, Oxnard and his colleagues’ expectations were subverted compared to what they had imagined from their offices. “Everything we thought it was going to be, it wasn’t,” he says. “It wasn’t that there were long lines of trucks, or that everything on the container yard was locked down. It wasn’t even that we couldn’t find our containers.”

Toyota was able to speak to terminal operators and locate many of the containers with its material inside, which operators would be glad to see go. Oxnard and his colleagues developed a container sequencing strategy that maximised both the number of containers pulled from the yard and terminal efficiency.

"We went from retrieving a few containers each day to eventually moving 60-70 per day... Unless you go down and talk to someone, you don’t see what the possibilities are " - Thornton Oxnard, ToyotaBy working together with its drayage partner at the port, the NAPO team found an answer. They encouraged the logistics provider to lease a fleet of extra chassis and bill them back to Toyota. Also, rather than moving each container from the port to Ontario, the companies realised it would be better to get them out of the yard first, rather than dealing with further disruption at the port. So the logistics provider moved the containers to a temporary yard a short distance away and hauled them later to Ontario at its own pace.

“We went from retrieving a few containers each day to eventually moving 60-70 per day,” says Oxnard.

[sam_ad id=6 codes='true']For Oxnard and NAPO, the critical point was to be present at the point of the problem and to work with people directly. “Unless you go down and talk to someone, you don’t see what the possibilities are,” he says.

Of course, this approach could only work for containers that were unloaded – it reaches its limit for ships stuck at sea or those diverted from the west coast altogether. But it had been successful enough to encourage Toyota’s logistics control team at its manufacturing arm, in Kentucky, to come to the port and work with NAPO on a similar approach.

“It will also be important now that the labour disputes are over, as there will be a surge in the port as full work resumes,
and we’re likely to see freight backed up for road and intermodal,” adds Oxnard. “We need to keep going and seeing. That’s the Toyota way.”