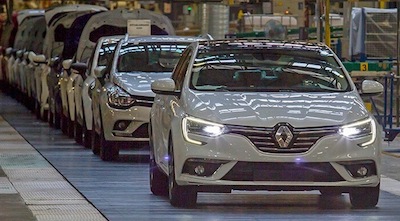 In a statement released by Turkey’s automotive export association – the OİB – chief executive Baran Çelik estimates that the Turkish automotive industry will export cars and components worth in excess of $32 billion in 2019.

That is a slight increase on the $31.6 billion of products exported in 2018. "Last year, we achieved an export average of $2.63 billion on a monthly basis," said Çelik. The monthly record was set in March at $3 billion and 2018 overall was a record-breaking year, showing an 11% increase on 2017.

Turkey has also now overtaken Canada as the country with the highest rate of automotive exports when compared to total automotive production. It now exports 83.3% of its total output.

The Automotive Manufacturers' Association in Turkey (OSD) has released statistics that show Turkey exported 12.4m cars and light commercial vehicles between 1994-2017. With exports from January-November 2018 added, this figure increases to 13.6m units.

In 2018, Europe imported more vehicles from Turkey than from any other nation, according to European Automobile Manufacturers' Association (ACEA) statistics. In 2017, it sent 1m units to Europe.