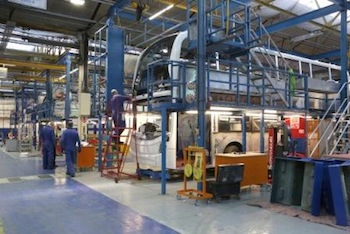 British-built commercial vehicle (CV) exports were up by more than a third in 2015, with around nine in ten destined for EU countries, figures by the Society of Motor Manufacturers and Traders (SMMT) shows.

New CV registrations in Europe increased by 12.4% in 2015 and improving European markets have definitely helped to drive the recovery of Britain’s CV sector.

In a recent SMMT member survey, access to European markets came out as the top benefit of EU membership for their businesses. The vast majority of OEMs in Britain and Europe want to remain in the EU, and the fact that the majority of British CVs exported were built for sale in Europe indicates the importance of having the EU as a trading partner for the UK automotive industry.

After Europe, the second highest export destination was Asia, accounting for 6.3% of exports. This was followed by Oceania at 2.4%, non-EU European countries at 2.1%, Africa at 0.6%, and North and South America at 0.4%.

However, for buses the situation was very different. Although 66.5% of buses built in Britain were sold domestically, the strong demand for double-deckers in Asia resulted in more than 90% of UK bus exports, or 1,025 units. For Oceania, large trucks were the most popular. The UK exported 76.8% of rigid 3/4-axle and articulated trucks there.

Mike Hawes, SMMT chief executive said, “British-built vans, trucks and buses are playing an increasing role in the global economy, with vehicles being sent to countries on every continent. The growth in overseas demand for high quality commercials is a huge credit to Britain’s commercial vehicle makers, and serves as a timely reminder of the EU’s vital importance as a trading partner to UK automotive.”