UK's relevance to Honda in doubt after Swindon closure 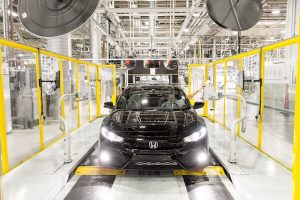 The long-term impact on the UK automotive supply chain of Honda’s decision to end production at its Swindon plant will take some time to assess, but the carmaker has admitted that Honda of the UK Manufacturing’s current role as a global manufacturing hub “may no longer be viable”.

Despite assurances the carmaker made in 2017, following a £200m investment in Swindon, that it was setting out a clear and sustainable future role for Honda of the UK Manufacturing as an export hub, Honda confirmed on Tuesday (February 19) that the Swindon plant would close in 2021, at the end of the current production lifecycle of the Honda Civic.

The plant currently has the capacity to make 150,000 cars a year (both Civic Hatchback and Civic Type R) and exports almost 85% of that overseas, with 55% of its exports going to North America and 20% going to Europe. In the future, Civics destined for North America will be made in the US while those for Europe are most likely to be made in Japan, as the carmaker seeks to maximise capacity utilisation at its plants there.

The recent signing of the economic partnership agreement between the European Union and Japan means that vehicles made in Japan can now be imported to Europe with tariffs diminishing to zero over a seven-year transition period.

Honda put the decision to close Swindon down to “unprecedented changes in the global automotive industry”, including the move to vehicle electrification which, it said, brought “significant challenges” and would see the company revise its global manufacturing operations. It has plans to reduce global production capacity from 5.4m to 5.1m units. Additionally, the EU has committed to reducing average carbon emissions from new passenger vehicles by a third by 2030 and is promoting an incentive mechanism for zero- and low-emission vehicles, going forward.

“In light of the unprecedented changes that are affecting our industry, it is vital that we accelerate our electrification strategy and restructure our global operations accordingly,” said Katsushi Inoue, Honda Motor’s chief officer for European regional operations and president of Honda Motor Europe. “As a result, we have had to take this difficult decision to consult our workforce on how we might prepare our manufacturing network for the future. This has not been taken lightly and we deeply regret how unsettling today’s announcement will be for our people.”

Honda’s decision affects 3,500 workers directly and there will inevitably be an impact on the wider supply chain in the UK, too.

The carmaker was keen to stress the decision was not related to Brexit. Announcing the move on Tuesday, Honda’s CEO Takahiro Hachigo said the decision to end production was nothing to do with the UK’s departure from the EU. Speaking on BBC Radio 4’s Today programme on the same day, Ian Howells, senior vice-president of Honda Motor Europe, said the decision was “not a Brexit-related issue” and had been made “on the basis of global changes”.

Clearly, however, any tariffs on vehicle exports from the UK or on inbound parts from the EU as a consequence of a no-deal Brexit would impact on the end cost of the vehicles Honda produces in Swindon.

Continued uncertainty over the future of trade halved investment in the UK manufacturing sector last year and earlier this month, Nissan said it was revising plans to make the X-Trail car in Sunderlandand would instead make it in Japan. Ford said last week that it was stepping up preparations to pull production out of the UK following concerns voiced in January that a no-deal Brexit could cost it £775m, and tier supplier Schaeffler said it would close its plant in South Wales in part because of Brexit uncertainty.

More immediately, there remain concerns over inbound and outbound supply chains. Back in January, Honda said it would suspend production at the Swindon plant for six days following the Brexit deadline as a “contingency provision” to deal with any potential logistics and border problems.

Honda has also announced that it will close its Kocaeli plant in Turkey in 2021, also as part of global production reorganisation. That plant makes the Civic sedan with an annual production output of 38,000.