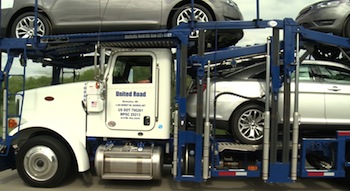 The acquisition will almost double United Road’s truck capacity to 1,500 units of company-owned and independent contract equipment, as well as drawing on 3,500 third party carriers, serving 10,000 customers. Kathleen McCann, president of United Road, described the acquisition as a “strategic game-changer” for the company.

United Road will now operate out of 75 locations throughout the US and Canada and said it expects to move 2.5m new, used and speciality vehicles in 2014. The move means that United will grow its existing business with customers including BMW, General Motors, Volkswagen, Glovis (serving Hyundai and Kia), Nissan and others.

Waggoners’ Auto Transport Division was set up in 1987, and has headquarters in Texas and in Montana. United Road said its technology platform and national sales centre will complement Waggoners’ new car customer base by filling empty backhaul miles with remarketed volumes.

“Waggoners’ customer base was familiar to United Road and allowed us to grow with our existing customers while maintaining the significant diversity of our base,” McCann told Automotive Logistics. “The additional availability of the new Waggoners capacity will also help us service more remarketing customers while filling more empty miles on our company-owned and independent contractors’ trucks.”

McCann went on to say that the companies’ respective geographic territories were “extremely complementary” and the new deal would make United Road much stronger in the southern US.

“Operationally, the Waggoners’ operations are very dense in the south-central and southeastern US,” said McCann. “United Road is similarly situated in the northeast and midwestern US. We both service the western US, so the geographic penetration will improve the saturation within our national network, creating additional capacity.”

The move to take on more business in the southern US bodes well for business given the shift in vehicle manufacturing to that region and further south in Mexico.

McCann said that United Road would continue to grow its presence in the south and in the port areas as domestic manufacturing and import opportunities increase from Mexico and elsewhere. “The forecasts for Mexican manufacturing for export into the US are impressive,” she said. “We are positioning ourselves to service our customers as their growth continues.”

She went on to say that when integrated, United Road would have a national network of nearly 20 company-owned maintenance facilities, it would support its goals of on-time vehicle delivery and driver safety.

“We expect to see greater operating efficiencies through the implementation of our technology as well,” she added. “All in all, it was a very attractive acquisition for United Road and should create terrific opportunity for our people.”

United Road is owned by Boston-based Charlesbank, which bought the company from private equity firm Gores Group at the end of 2012.

The Waggoners aquisition markes the second large acquisition of a finished vehicle logistics carriers in North America in recent months, following Jack Cooper's takover of bankrupt Allied Systems, which had been North America's largest car haulier. The deal received government approval last month. The recovery in vehicles sales and production in the US, along with imports from Mexico, continues to drive demand for vehicle logistics, with logistics providers such as United Road and Jack Cooper looking to secure capacity. Jack Cooper Holdings' chairman, Mike Riggs, said earlier this autumn that the Allied acquisition was a "capacity play".

“It will allow us to do certain thing that maybe we couldn’t before, including adding capacity in Mexico," he said.