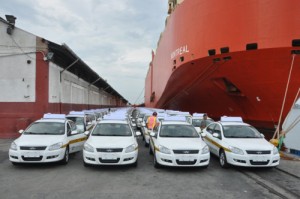 Chinese carmaker Chery has delivered a first volume instalment of 2,500 taxis to Venezuela through the port of Cabello. The delivery follows an initial shipment of 400 vehicles last month.

The Venezuelan Minister of People Power for Aquatic and Air Transport (MPPTAA), Giuseppe Yoffreda, supervised the unloading as part of the government's Transport Mission programme. He was accompanied by the vice president of development investment and the president of the Venezuelan Bank of Economic and Social Development, all of whom had helped to facilitate the transaction.

“The 2,500 vehicles discharged at this time form part of a first lot acquired to fulfil the first phase of this great project,” said Yoffreda.

The vehicles are Chery Orinoco models.

“This will make it possible for the Venezuelan public to [benefit from] the highest quality service,” added Yoffreda.

The cars had arrived from Shanghai aboard the Liberian-flagged car carrier Monteal, which docked at berth 6. They had been consigned by the Venezuelan company Suministros Venezolanos Industriales C.A (Suvinca), part of the Corpovex goup, which has been tasked with promoting a socio-economic model for the country through the importation of goods and services that will help fulfil this aim.

Also aboard the vessel were 300 new trucks.