Sallaum Lines is well established in the movement of vehicles between the US, Europe and Africa, and has now signed new contracts with BMW and Ford for the shipment of vehicles from South Africa to Europe

Sallaum Lines has secured contracts with carmakers BMW and Ford for the movement of vehicles between the port of Durban in South Africa to markets in Europe. Shipments will begin in January 2022.

“Sallaum Lines is honoured and excited to expand its partnership with Ford and BMW,” says its vice-president, Sami Sallaum.

“We are pleased to work with Sallaum Lines side by side to provide trimodal finished vehicle logistics services to the OEMs,” said Walid Salloum, managing director of Salloum Logistics. “We have proved a high level of commitment and a solution-oriented strategy to all our customers through the past years. Beside deep-sea services our companies are offering various services, including terminals and vehicle distribution.”

Sallaum Lines is honoured and excited to expand its partnership with Ford and BMW – Sami Sallaum, Sallaum Lines

Competitive services
The company is one of the top ten vehicle carriers globally and draws on decades of experience in moving vehicle volumes between the US east coast and Europe to north and west Africa. It is now looking to capitalise on backhaul trade through new tenders on its routes between South Africa and Europe – trade that promises to make its forwarding operations more efficient and sustainable, as well as optimising its global network. According to Kay Lemke, managing director of Sallaum Lines in Germany, vessels on the US and Europe to Africa lane have previously been loaded in one direction only. With the new contracts for Europe-bound vehicle volumes the company is able to fill vessels in the opposite direction. 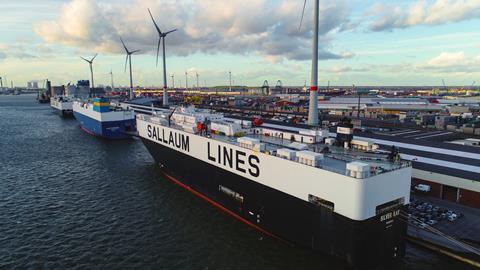 The company is also ambitiously restructuring its business to offer customers new and competitive services in an industry that is limited to a small number of major players.

To provide additional capacity for the growth in vehicle handling, Sallaum Lines is investing to expand its fleet size, beginning with two additional pure car and truck carriers (PCTCs). One is being delivered in January 2022, with a second to follow in June. That will bring Sallaum’s own fleet size to ten vessels.

Sallaum Lines has followed a strategic path of vessel acquisition over the last decade and as new vehicle trade increases it will look to build on its fleet size with sustainable vessels conforming with IMO regulations. The company will also continue to work with charters, as it has done in the past. The company has thereby secured the additional tonnage required to secure capacity and frequency of sailings for BMW and Ford when output rebounds in wake of the semiconductor shortage.

Sallaum Lines is working to the IMO’s Carbon Intensity Indicator (CII), which from 2023 will measure how efficiently a ship transports goods and is given in grams of CO2 emitted per cargo-carrying capacity and nautical mile. Each vessel will be given an annual rating ranging from A to E, and the rating thresholds will become increasingly stringent towards 2030. 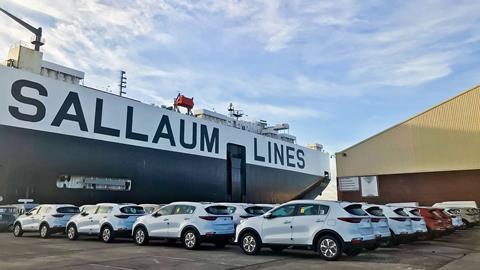 The company has set a long-term target of net-zero emissions of greenhouse gas (GHG) by 2050. The goals and visions of the initial GHG strategy are to reduce the carbon intensity of international shipping. This means a reduction of CO2 emissions per transport work, as an average across international shipping by at least 40% by 2030, and working to achieve 70% by 2050, compared to 2008.

Sallaum Lines’ sustainability report and the entire roadmap for GHG reduction, which includes its non-ocean-going businesses, will be announced later in 2022.