Volkswagen trials smartwatch and RFID for parts picking at Wolfsburg 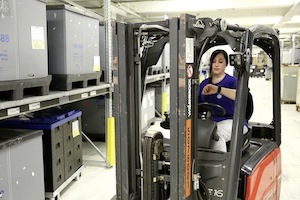 The Volkswagen Group has revealed that it is running a four-week trial at its plant in Wolfsburg, Germany to test the use of smartwatches and RFID armbands in order picking and material logistics processes. These two projects are on top of the current use of around 100 tablet computers in picking trolleys and forklift trucks that improve routing across the plant.

The plant logistics team at Wolfsburg, together with the Volkswagen Group IT department, developed a specific app to use across this technology.

Reinhard De Vries, the head of plant logistics for Wolfsburg, which is the group’s largest plant globally, said that digitalisation was playing an increasingly important role in the carmaker’s logistics and material handling. "We are continuously working on innovative logistics solutions that make our processes even more stable and faster,” he said. “To further increase our productivity, we are increasingly focusing on digitalisation, as shown by the use of 3D headsets, smartwatches and RFID systems.”

The trials are introducing a higher level of automation into the parts order and picking process at Wolfsburg. Volkswagen is trialling smartwatches, for example, in a ‘dynamic storage’ area for parts picking, where material has no fixed storage plans but are moved on a ‘first in, first out’ (FIFO) principle. Employees wearing the watches use their built-in camera to scan the material’s barcodes and thus receive all the necessary discharge points and part numbers on the watch. The smartwatch can collect and process data faster than a traditional barcode scanner, while also allowing the worker to operate hands free.

The second project, involving the use of RFID armbands, is an extension of the use of radio frequency in material logistics at Wolfsburg, which has been in place since 2009, to parts picking. The armbands operate similar to pick-by-light or pick-by-voice systems. When an employee reaches into a parts container, the radio will automatically signal by beep that he has taken the correct part. If he takes the wrong part, there will be a double beep.

As with the smartwatches, these armbands eliminate the need for a separate barcode scanner and free up both hands for picking. According to Volkswagen, this technology is a viable alternative to 3D data glasses.

As well as trialling more digital technology among its workers, the Wolfsburg plant is now using data-connected tablet computers for around 30 order-picker trucks and 60 forklifts. This equipment can better detects components and orders, while it is also equipped with a navigation system to help workers orientates themselves throughout the plant’s halls.

According to the Volkswagen Group, similar trials are currently under preparation for other group plants in Germany, including at Braunschweig, Kassel and Emden.

Ongoing RFID projectsThe current trials are part of a more extensive push by the Volkswagen Group to introduce ‘Industry 4.0’ technology and concepts into its production and supply chain. Audi, the group’s premium brand, for example, has been rolling out more use of RFID in logistics and material handling at its plants (https://automotivelogistics.media/intelligence/audi-special-report-strong-at-the-core).

The Volkswagen Group has also been using RFID to improve data exchange with suppliers in prototype development as well. According to the German publication RFID im Blick, the carmaker has been rolling out the use of RFID-equipped prototype parts from suppliers as part of its ‘Transparent Prototype’ project, which allows for their automated verification at factory gates. Currently around 150 suppliers for a similar number of different parts are involved in the system. Around 300 suppliers are expected to be using RFID-enabled parts this year, according to Dr Malte Schmidt, head of the Transparent Prototype project.

Schmidt told RFID im Blick that the carmaker currently has around 20-RFID enabled gates in the technical development division, which is also used to identify reusable containers and packages.