[sta_anchor id="1"]Volvo Trucks North America is improving its complex delivery network across the US, including investments in new technology and in supporting its carriers

Reflecting continued strength in the US economy as well as sustained low oil prices, last year saw strong growth for sales of medium-and-heavy trucks in the US. Deliveries of truck classes 4-8 reached 477,428 units, a growth of nearly 10% compared to 2014, according to the Automotive News data centre. Class 8 trucks, which include heavy-duty tractor-trailers, meanwhile, grew by 13% to 249,000 units.

Volvo Trucks North America achieved a record share of the US market last year at 12.4%, which included deliveries of around 39,000 finished units – its highest number ever and a 20% increase over the previous year, according to Magnus Koeck, vice-president of marketing and brand management.

This year, however, weaker growth in the US and economic uncertainty have taken a toll on commercial trucks, especially for the heavy vehicle sector, where sales of class 8 trucks have declined by more than 10% in the first four months of the year. Truck companies have announced layoffs and cut-backs in both the US and Mexico.

These significant swings in demand, not uncommon for the truck market as it so closely follows economic moods across the country, must be managed across the OEM’s outbound logistics network. Just as Volvo needs to respond to high demand, it must also quickly be able to regulate shipments and carriers, as well as move equipment to growing export markets in North America and beyond.

That is one reason why Volvo has been honing its logistics, including a ‘hub-and-spoke’ network of distribution centres that helps it balance flows and improve order-to-delivery times. According to Koeck, the truckmaker is also looking beyond today’s market trends to support long-term developments, be it adapting to alternative fuels or using autonomous driving technology.

[sta_anchor id="2"]A big network for big trucksIn delivering its heavy trucks, Volvo’s primary method is to ship one or more units on a single road carrier using ‘saddles’ mounted on the back of each one. This process, in which loaded trucks are transported at an angle, is known as ‘piggybacking’ or ‘decking’. The truckmaker uses a number of subcontractors to carry out the haulage and, to a lesser extent, drive individual trucks directly to their destination – a method usually referred to as ‘jockey’ transport. Furthermore, approximately 1% of Volvo Trucks’ finished trucks are delivered individually to ports for export.

The firm considers a number of factors in determining the best transport method, including mileage bands, lead time, cost and loading factors.

Volvo Trucks uses several primary carriers and a number of ad hoc suppliers, depending on volumes. 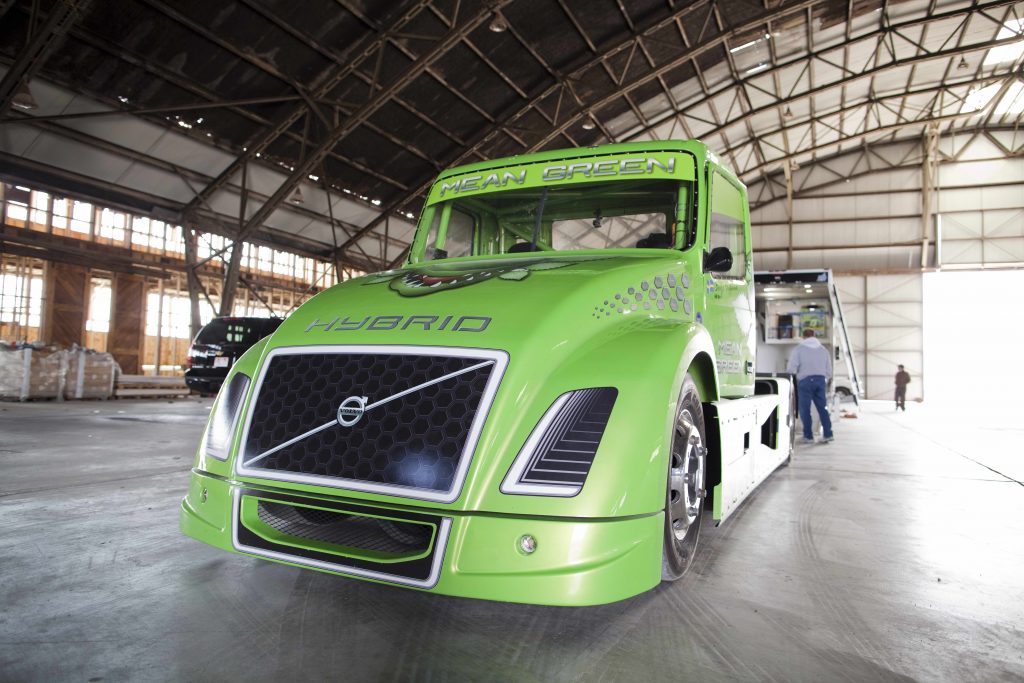 "The industry requires capital investment in physical [CNG and LNG] refuelling stations that are comparable to diesel stops along the North American interstate and highway system," Magnus Koeck, Volvo Trucks North America
To improve delivery efficiency, Koeck says Volvo Trucks’ carrier base has invested significantly in a network of 17 hub-and-spoke facilities located throughout the US. The network’s newest hub opened in Chicago, Illinois last summer.

Building this hub-and-spoke network has required substantial investment by Volvo’s carrier base in real estate, labour training, drivers and hoists – the latter being used for loading finished trucks onto carriers.

This distribution approach helps to maximise proximity of the initial delivery to final destination, while generating faster cycle times for specialist deck drivers. Koeck adds that Volvo’s distribution centres allow it to focus more on last-mile logistics to the final destination. This typically involves optimising load building and delivery scheduling.

“The hub-and-spoke operations enable our customers to receive their trucks in a condition that permits the end user to haul freight immediately and avoid the delays that are associated with pre-delivery inspection,” points out Koeck. “Demand for this type of delivery is rising.”

Volvo Trucks’ finished vehicle distribution centres unload decked trucks before applying their aerodynamic fairing, which helps to reduce wind resistance and thereby both noise and fuel consumption. They may also reinstall axles, remove plastics (such as coverings) and install antennas; one of its hubs also has vehicle-washing facilities. After performing these services, the carriers deliver finished products individually to dealerships or directly to customers.

In part because of the investment and service required across this large network of distribution centres, Koeck emphasises supplier development initiatives aimed at keeping the carrier base informed and financially healthy.

“These initiatives begin with the request for proposals, in which Volvo works with its supply base to assign volumes to carriers that have synergies in potential lanes so that we can leverage existing resources, such as labour,” he says. “Secondly, our increasing level of delivery precision has allowed dealerships and national accounts to schedule more accurate and reliable appointments for end users to take final delivery.”

Koeck says the firm has enhanced its delivery precision by working in small cross-functional teams that include representatives from manufacturing, sales, purchasing and logistics. These teams have the authority to implement systemic or operational changes in real time to meet the customer’s original confirmed delivery date.

“This type of cooperation creates a faster-moving decision-making body,” he notes. “Additionally, sharing information, including the latest build schedules, among all partners and colleagues has increased transparency, minimised confusion and removed speculation about supply chain and delivery issues.”

Another area Volvo Trucks has been working on is the incorporation of its carrier base into the principles and training involved in the Volvo Production System, including bringing these principles into vehicle yards and distribution centres across the supply chain.

“We are aiming to remove any workshop waste and waste connected to delivering trucks in order to meet our customers’ expectations,” Koeck says. “Our carriers have embraced such continuous improvement to the degree that they have dedicated resources in place. The most prevalent changes have been significant reductions in lead time.”

In one example, Volvo Trucks held a three-day workshop with its decking partner that covered topics related to improving workstation efficiency. In identifying several processes together, the truckmaker and its logistics provider eliminated more than 40 miles of wasted annual walking, says Koeck.

[sta_anchor id="3"]Technology is also playing a bigger role in the company’s communication across its carrier base. For example, there is growing demand for connected trucks that allow customers, dealerships and national accounts to view the location of a chassis from an office or mobile device, says Koeck. “This assists our dealership sales teams to schedule more accurate customer appointments and provides our national accounts with service predictability,” he says.Koeck sees further potential in telematics. For example, those that are equipped with Volvo Remote Diagnostics, a telematics-based diagnostic and repair planning system that monitors critical fault codes, can be used to provide internal stakeholders with the most current set of events during transport, such as the vehicle’s location. “This data set enables our logistics teams to communicate proactively and directly with our sales teams or dealerships, which in turn allows our customers to obtain visibility,” he says. 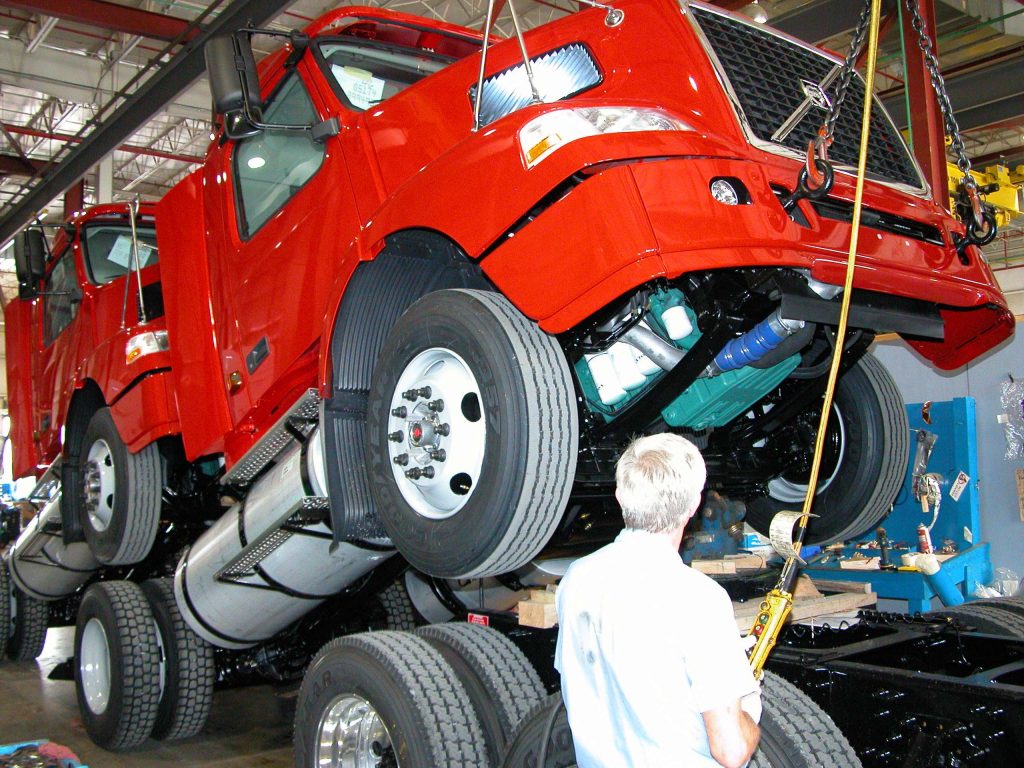 As part of its efforts to improve delivery efficiency, Volvo now carries trucks into Mexico still decked, rather than having them undecked at the border and driven across individually

While telematics can offer high levels of visibility, Volvo is also trying to shore up more traditional logistics communication technology, including the implementation of Electronic Data Interchange (EDI) messages across Volvo’s carrier base, which Koeck says will eliminate manual reporting solutions and provide more visibility and real-time reporting for customers. “Our goal is for all carriers to be EDI compliant in 2016,” he reveals.

Currently, about a third of the carrier base uses EDI, with the rest relying on manual methods of communication.

[sta_anchor id="4"]Ready for changeAs the economy has grown in the US, and the freight sector with it, Volvo Trucks, like many other companies in the logistics industry, has frequently found its network short of drivers in peak months, reveals Koeck. “As an industry, we need to brand driving and delivering trucks as more appealing to a bigger slice of the younger generation and women. These two largely untapped segments should be our focal points,” he suggests. “We need to do a better job of telling the story, recruiting and adjusting to this populace, instead of these resources adjusting to our methods.”

The company already takes several measures itself, including assessing carriers’ CSA scores to make sure drivers are both reliable and likely to be retained. It also tries to avoid leaving drivers in hotels over weekends, which Koeck suggests helps support morale and productivity.

As both a truckmaker and a user of logistics services, Volvo Trucks is also focused on alterative fuel technology for the trucking sector – an area that has arguably taken a hit over the past two years thanks to cheap fuel prices. Koeck cites the lack of compressed natural gas (CNG) and liquefied natural gas (LNG) refuelling infrastructure across North America as a concern, especially as more firms are now looking to implement such technology.

“This situation inhibits our ability to deliver alternative fuel chassis to customers directly and results in trucks arriving at their final destinations by flatbed trailer, towed or decked,” he says.

“While there are many different theories in the pipeline, a few are constantly on our radar, including alternative fuels – specifically CNG and LNG. When the price of diesel rebounds, both of these solutions become more viable and cost-effective for end users,” Koeck continues. “We believe the time is ripe now to discuss the necessary infrastructure needed to support travelling by CNG and LNG from coast to coast. The industry requires capital investment in physical refuelling stations that are comparable to diesel stops along the North American interstate and highway system.” 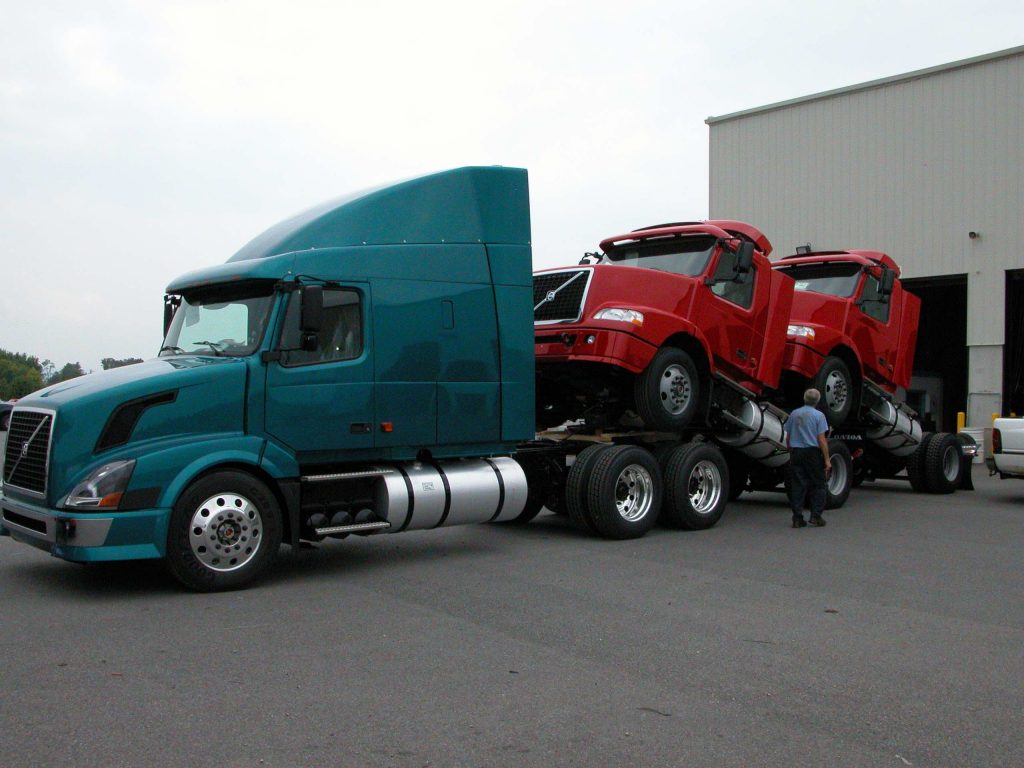 While exports are a small part of Volvo Trucks’ business from the US, Koeck adds that the company needs to be ready to react to changes in demand, both for serving nearby markets such as Mexico, or countries further afield

Autonomous vehicles are another area of growing interest. This technology may be in its infancy in terms of both applications and regulation, but the Volvo Group’s home country of Sweden is already involved in a number of notable trials and Koeck believes Volvo Trucks should always embrace ideas that could make the industry safer, increase efficiency and help alleviate some of the driver shortage concerns.

While exports are a small part of Volvo Trucks’ business from the US, Koeck adds that the company needs to be ready to react to changes in demand, both for serving nearby markets such as Mexico, or countries further afield. “As global economies continue to rebound, we need to be able to react quickly,” he comments. “Even fractional upticks have the ability to be disruptive. This is why we stay close to our marine partners and our ports of entry.”

Chassis that are desinted for export overseas are delivered to ports in single loads rather than on carriers or piggyback.

For the Mexican market, Volvo Trucks has stretched its operations and sought to find the most efficient methods for exporting finished trucks from the US, says Koeck. “In this important emerging market, we are evaluating options that will target Mexico and will enable the expansion of our footprint,” he confirms.

As elsewhere, the OEM currently moves product into Mexico by deck set along the road. Until recently, however, chassis were undecked at the border in Texas and driven individually into Mexico, which made the process longer and required much labour, says Koeck. Using deck sets, however, allows the companies to move more fluidly over the border.

The truck market in the US and North America may have entered another cyclical decline. However, Volvo Trucks North America is clearly looking further ahead, with strategies focused on improving today’s finished vehicle delivery systems and on meeting the market demands of tomorrow’s heavy truck industry.