VW opens new base in California 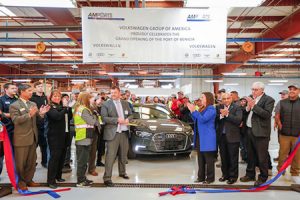 Volkswagen Group of America has officially opened a second finished vehicle distribution centre in California, at the port of Benicia in San Francisco Bay.

Vehicles will be staged there for 81 VW, Audi, Bentley and Porsche dealers in northern California, enhancing customer service and delivery times, the company said.

Among the vehicles to be imported via Benicia are VW’s long wheelbase Tiguan, e-Golf and, in time, the 2019 Jetta compact sedan and Arteon four-door coupé. Audi vehicles include the A4, A5 Sportback, Q5 and Q7.

The group said it planned to handle up to 42,000 vehicles there within a year and around 220,000 during the next five years.

The $1.3m investment at the port adds to Benicia’s capacity to serve the VW Group and all importers-exporters in the state, said Panorea Avdis, director of business and economic development in the governor’s office. The car terminal at the port is operated by Amports.

Since 1990, VW has distributed vehicles from the port of San Diego, in southern California. More than 160 VW and Audi dealers in the western US are supported from that base.

The new centre will save more than 800km on delivery routes for vehicles passing through it, which will bring down costs, Anu Goel, executive vice-president for aftersales and services at VW America, was reported as saying in local media. Goel added that the company hoped to add to the 38 permanent jobs currently being created.

Anu Goel will be speaking at the Finished Vehicle Logistics North America conference, which takes place in Huntington Beach, California on March 13-15.