VW pushes the boat out with LNG-fuelled car transport

Volkswagen Group Logistics (VW Logistics) says it will be the first company to use car carriers powered by liquefied natural gas (LNG) in overseas traffic. 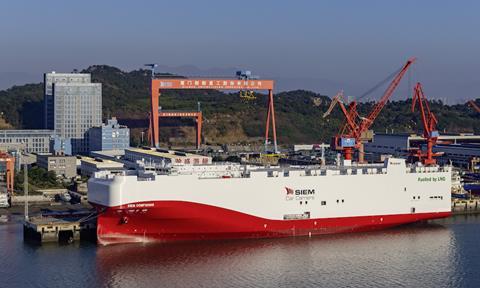 The two ships, chartered from UK-based Siem Car Carriers were launched in Xiamen, China, earlier this month. Each capable of transporting 4,700 cars, Siem Confucius and Siem Aristotle will respectively be deployed between Europe and North America from January and the second quarter next year.

Zernechel added: “In addition to the increasing use of LNG trucks, conversion of our many rail transports to green electricity and the use of biofuel in the short-sea segment, the two new LNG ships represent an important building block for our strategic goal of climate-neutral logistics … [and] our production strategy goTOzero with the goal of production and logistics not harming our environment.”

Both vessels will replace two of the nine conventional heavy oil-powered cargo ships currently used by VW Logistics on the northern Atlantic route.

The two technologically advanced ships are each 200 meters long and 38 meters wide with 13 car decks.

The building of the vessels was first announced in March last year.