Work begins in China on LNG vessels for VW 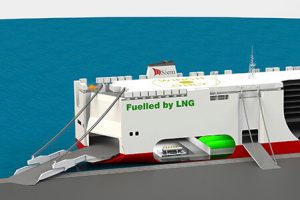 The Xiamen shipyard in China has begun work on the first of two pure car and truck carriers (PCTCs) for Volkswagen Group Logistics, which will be operated under charter by Siem Car Carriers and will run on liquefied natural gas (LNG).

The vessels will be in service by 2019, moving vehicles from Europe to North America, according to VW. The company has not revealed an investment figure.

Markus Lange, head of vehicle logistics of Volkswagen Group Logistics, attended a steel cutting ceremony in Xiamen to mark the start of the work.

“Greater sustainability in logistics is a key issue for us,” he said. “The use of two LNG ships for transporting vehicles is a major step forward which we can only take together with our strong partners.”

VW said the ships would reduce carbon emissions by up to 25%, NOX (nitrogen oxides) by up to 30%, and particulates by up to 60%. They will also cut the emission of sulphur oxides by up to 100%, an important factor given that stringent rules governing sulphur emission control areas around European and US shores.

In October 2016, the International Maritime Organization (IMO) officially approved more stringent global sulphur emissions requirements that must be in place by the end of the decade.