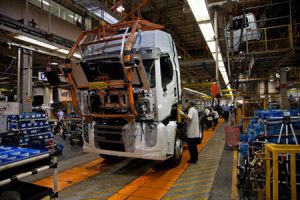 Volkswagen’s bus and truck plant at Resende, in the Brazilian state of Rio de Janeiro, is reported to be back to normal production, following a week of strikes in the road haulage industry at the end of May.

A spokesperson for the company said it was now working with its 4,000-strong workforce and the union representing them on ways to make up the shortfall in production. The Resende plant currently operates on a single shift.

According to a report from new source Reuters, Roberto Cortes, the president of VW’s Latin America Truck and Bus division, said he was confident the negative financial impact of the strike could be overcome by the end of July. He stressed that the company had not lost any orders because of the production shutdown and that sales were slowly coming back to normal.

Throughout the strikes, sales continued across VW’s other markets in Latin America, with 610 buses sold to the Mexican Group Transportes Lamsa. The $60m contract involves MAN trucks being shipped from Germany over the next five years. It is the biggest such contract won by the company in recent years, according to Cortes.

To end the haulage drivers’ strike in Brazil, the government was forced to lower taxes on the price of diesel. However, to offset the resulting $1 billion loss in tax revenue, the government has announced a reduction in tax benefits for exporters.

Cortes said it was still too early to judge what impact that would have on the automotive industry. But if instability continued, he said, truck sales might be negatively impacted. If lower interest rates are maintained and the national fleet renewal process continues, this could help to mitigate buyers' concerns, however.