VW and Bosch to upscale EV battery output in Europe

Volkswagen and tier one supplier Robert Bosch have agreed to establish a joint venture by the end of 2022 to expand the production of lithium-ion batteries for electric vehicles (EVs) in Europe.

The unit set up by the two companies will look to supply integrated battery production systems and maintenance support for battery cell and system manufacturers. 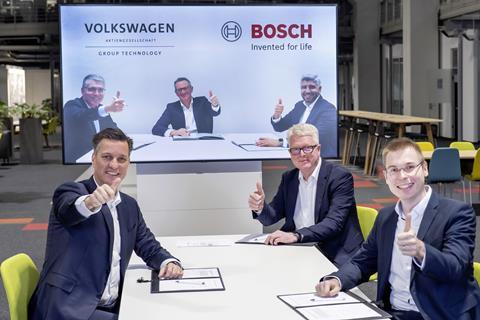 European battery production is set to increase dramatically by 2030, by which time installed annual capacity is expected to hit 700 gigawatt hours (GWh). VW alone aims to have six battery making facilities in operation by then.

CEO of Volkswagen Group Components, Thomas Schmall, said that Europe has the “unique chance to become a global battery powerhouse in the years to come”. He added that there is a growing demand for all aspects of battery production, including new gigafactories.

Schmall believes the joint venture with Bosch will also help establish a fully localised European supply chain for e-mobility made in Europe.

Bosch is the world’s biggest automotive supplier and one of the leading suppliers of factory equipment. Working with VW it expects to supply the entire range of processing equipment and components required for the large-scale manufacturing of battery cells and systems.

Rolf Najork, head of Bosch, said: “The European industry has the potential to become a technology driver for the ecological transformation of the economy.”

A rising Europe
The deal marks a significant shift for Bosch, which sold its cell chemistry division in 2018 and withdrew from the research into materials and processes of battery cells for electric vehicles. Bosch cited the risky high investment costs of setting up a production facility.

However, following the new deal with Volkswagen, the scale required to re-enter the growing battery production field may now be possible.

“In creating a European battery supply chain, joint ventures, partnerships and collaborations are increasingly important, but especially so in Europe where there is not the established knowledge base compared to Asia,” said Daniel Harrison, analyst for the business intelligence unit, Automotive, at Ultima Media.

However, there is now a concerted effort being made to establish battery production more firmly in Europe. Harrison highlighted by example Automotive Cells Company (ACC), which has plans for two gigafactories in France and Germany, and already has a pilot plant running in Nersac, France. ACC is now owned by Stellantis, Mercedes-Benz and TotalEnergies’ subsidiary Saft, and provides a clue to the future of the more vertically integrated business many think necessary to increase battery production in Europe and challenge the dominance of the Asian markets.

Sharing expertise
Tier one suppliers such as Bosch, Borgwarner and Dräxlmeier are putting more resources and investment into becoming large-scale lithium-ion battery suppliers as the shift to electric powertrains accelerates.

“Partnerships can and should extend beyond just the OEM and tier two cell suppliers, and also include the expertise of the tier one suppliers,” said Harrison. “They are often involved in the design of the batteries and integrating the complete battery system, as well as the EV powertrain and platform, as we see here with the agreement between VW and Bosch.”

It is becoming imperative that joint ventures such as the one between VW and Bosch extend products and services to all parts of the supply chain, including upstream to the battery components and raw materials. In doing so they can help to secure the supply of finished products at time of highly competitive demand for resources. There are also opportunities to provide services in battery recycling, reuse at the end of the vehicle lifecycle, and even in terms of EV charging infrastructure.

This comes just as Europe struggles to catch up with Asia, particularly China, on battery production. European companies are not just looking to scale up productivity but also bring supply chains closer to home.

According to Harrison, localisation of the battery supply chain is increasing for a variety of reasons: reducing logistics costs and carbon footprint; helping to meet future EU mandates around rules of origin and sustainability; ensuring security of supply in times of disruption, capturing the lucrative battery value chain for Europe; and ultimately to lower the costs for battery production and the EVs in which they are installed.

The efforts to build batteries in Europe rather than rely on Asian imports is exemplified by VW’s behaviour in recent years. It recently increased its ownership in Northvolt and acquired the battery maker’s shares in a 50/50 joint venture, Northvolt Zwei, in Salzgitter, Germany. That followed a previous announcement with Northvolt to construct a 16GWh battery-production facility in Lower Saxony by 2024.

VW is also making batteries at its Braunschweig (Brunswick) components plant in Germany for supply to the Zwickau EV assembly plant. The cells are delivered to Braunschweig from LG Chem’s plant in Wroclaw in Poland.