Oliver Zipse, the carmaker's board member for production, reveals how it intends to sharply increase the level of automation involved in its production and logistics activities 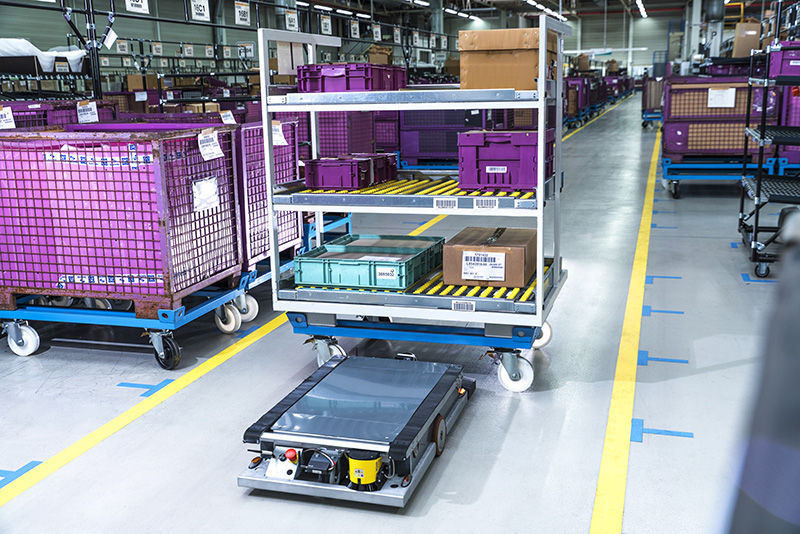 Speaking at a logistics conference in Berlin this week organised by the German federal logistics association BVL, Oliver Zipse, who has been board member for production since last year, proposed nearly eliminating manual line-feeding of parts to assembly lines by using advanced automated guided vehicles (AGVs). Meanwhile, a standardised data interface, linked to a cloud-based system and using autonomous driving technology, would allow logistics assets and finished vehicles to propel themselves through the supply chain while providing real-time information and advanced notifications.

“BMW’s production process is today mainly centrally controlled and managed, with logistics driving our production in accordance with the wishes of customers,” said Zipse. “We are working towards a reorganisation of production processes by connecting all the work flows in logistics. The idea is that, through digitalisation, our global value chains will be more transparent. In the long term, we want to move away from central steering towards the self-steering of objects in the supply chain.

For BMW, this transformation is set to start from the customer order, and move through the supply base, the factory line side, and outward to dealers and customers.

Some aspects of the change are likely to be relatively uncontroversial and represent a continuation of current processes, like the use of RFID or telematics technology to improve material and vehicle visibility.

In other areas, however, BMW has mapped out automation processes that would potentially replace some jobs carried out today by BMW staff or suppliers, including moving material within warehouses and factories, delivering to the assembly line and handling finished vehicles in yards and ports.

Zipse admitted such new approaches would depend on secure and standard data interfaces that would allow the OEM, its tier suppliers and the material and equipment in the supply chain to communicate via digital cloud networks.

Despite the likely reduction in manual labour and human decision-making, Zipse insisted that this transformation – which is already evident in a number of pilots for AGVs in German plants and for connected finished vehicle distribution – would depend on close partnership in the supply chain with suppliers and logistics providers. “We cannot go it alone – 70% of the value creation in our vehicles is done with suppliers,” he said. “We count on their expertise to max out the use of the existing system. And their technological vision will also add to making logistics even more efficient and reliable.”

Digitally erasing the yellow lineBMW is moving towards a more digitally based order and supply chain management system, he said. Customers will increasingly choose their vehicles and options online. From there, he described a production planning and supplier order process that would largely be automated.

“The [customer] order will appoint itself in the production system, allocate itself to the proper plant, and establish a delivery time to dealers,” he said. “The necessary parts supply orders will also be automated, with the parts needed controlling transport to their necessary delivery sites.” 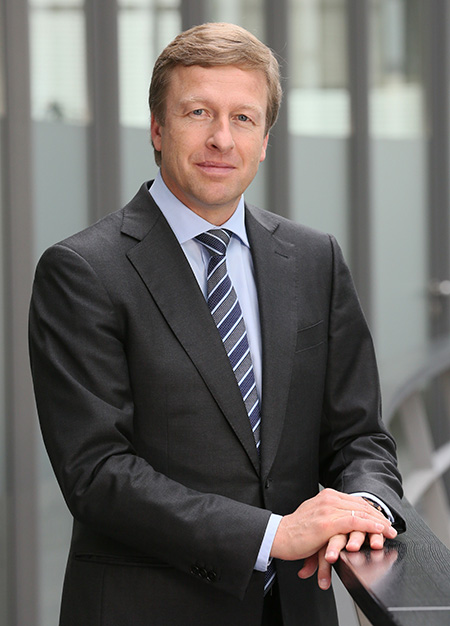 Zipse: autonomous vehicles are likely to establish themselves in production environments earlier than out on the road network

Along with an automatic order process – aspects of which are already in place at the carmaker – BMW’s parts and vehicles will communicate across the logistics chain, according to Zipse. For example, the use of ‘smart containers’ will show information in real time about inventory, location and the conditions of parts and materials in the supply chain, with all the data captured in the digital cloud. Weather, strikes or other potential disruptions will also feed into the cloud, allowing BMW to reroute freight or charter emergency transport before it is too late.

Finished vehicles, meanwhile, will increasingly use in-vehicle telematics to broadcast their information to logistics providers, dealers and customers. Once built, it will effectively be the vehicle that tells a carrier to pick it up, for example. The vehicle will also schedule itself into body shops for customisation or changes.

Since last year, BMW has been running a number of trials in which it uses vehicles’ built-in telematics and infotainment systems to track locations and diagnostics, part of a project called ‘Connected Distribution’. A future version of the plan would also incorporate driverless functionality in the distribution chain, from self-parking and loading to the use of driverless trucks.

But it is perhaps within the factory and its warehouses that BMW is moving quickest towards a version of this highly automated, connected future. Here, Zipse indicated that BMW was looking to implement more intelligent AGVs that used self-driving technology similar or equal to that of vehicles on the road. That will mean a set of equipment that can move freely through shopfloor areas in parallel with flow and demand, unlike fixed-path AGVs or tugger trains.

“The first truly autonomous vehicles will probably operate in shopfloors before they can be used in traffic, as the conditions are much easier to predict,” commented Zipse.

BMW is already trialling a number of self-driving robots, co-developed with technology and research institution Fraunhofer, at plants and logistics centres, which it has projected will contribute to a significant reduction in costs.

This setup would move BMW’s plants towards “erasing the yellow line”, he indicated – referring to the point at which parts are delivered to the assembly line and which has traditionally separated logistics from manufacturing at BMW.

The future assembly line will still feature many human tasks, he predicted, but delivery to it will be almost completely automated, including mobile robots that cross the factory floor to work on vehicles and, potentially, entire shelves of parts being moved to the production line.

Fast change coming slowlyThis transformation, though significant, would not necessarily put BMW in the vanguard of logistics automation and data digitalisation, as some sectors are already well ahead of the automotive industry in terms of automation of logistics and production tasks.

Dr Robert Blackburn, president of information services and supply chain operations at German chemical producer BASF, as well as a board member of BVL, revealed at the conference that two of its largest warehouses and one of its factories are already completely automated, with no humans working in them.

Roy Perticucci, vice-president for Europe customer fulfilment at e-commerce giant Amazon, said that the company had implemented a tremendous amount of AGVs and automated handling technology at its warehouses, including moving entire shelves in the way BMW envisions doing.

“The assumption in logistics is that you have to move pickers to shelves. We are moving shelves to pickers and that has made a huge difference to us,” said Perticucci.

However, the scale of part numbers and variety in vehicle production has traditionally made it more difficult to automate some aspects of sorting and handling. Labour and union agreements in some regions, including Germany, have also traditionally put some barriers on automation.

But things are changing. BMW and Fraunhofer’s ‘smart AGVs’ can deliver loads of varying lots and sizes, including up to half a tonne. A pilot project using the AGVs to deliver smaller boxes and handle empty containers started earlier this year at a logistics centre in Wackersdorf, in Bavaria, and also at BMW’s assembly plant in Regensburg, said Zipse. 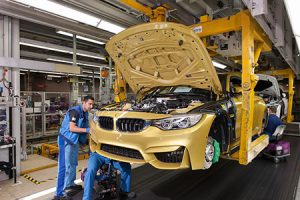 In BMW's vision of the future, the supply of parts to the assembly line will no longer involve staff picking items from remote shelving, while mobile robots will cross the factory floor to work on vehicles

While BMW is effectively co-building these AGVs with Fraunhofer and using its own technology for self-driving and IT systems, Zipse suggested it need not be BMW’s equipment or central systems that controlled the process in future. Instead, customer demand and automated orders should set the pace, with autonomous machines interacting with one another. The technology could even be on open-source platforms, he said.

“No matter who produces these vehicles, they will be given an order by a job broker, have sensors, digital map and be able to report disruption,” he said. “The digital autonomous system is intelligent enough to be independent from central control.”

Need for data interface and standardsZipse did not provide a timeline as to when BMW would shift to this more automated approach. However, he indicated the transition would require significant work in connecting data and IT systems across BMW and its supply chain.

“We need a data cloud with a secure back-end that is still in close vicinity to a digitised car,” he said. “That raises questions over who owns that data and who can use that data in their business.”

Another condition is for a smooth integration of data flows across supplier and logistics providers, with all partners connected via an effective data interface. That includes interfacing between AGVs and suppliers, since a decentralised, machine-to-machine based communication will need to be based on real-time demand and variations in delivery or products. Zipse even suggested that trucks could deliver AGVs loaded with parts between supplier sites and BMW’s plants.

According to Zipse, BMW currently has around 1,800 suppliers across 4,500 locations supplying 30m parts a day across the carmaker’s global plants. Given the size and scale of this supply chain, Zipse suggested, it would be data flow and management that would help it increase its efficiency.

“We need transparent data through the whole transport chain, and the ability to read data in an ever more complex flow,” he said. “Data is the gold of the 21st century.

For more on BMW’s logistics innovation and ‘industry 4.0’, see BMW: Flexing up for the fourth revolution.