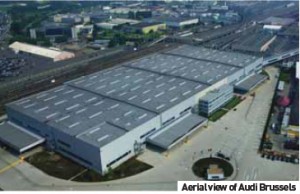 Cargo transport and freight operations started to resume today (March 23rd) following the terrorist attacks at Brussels Zaventem airport and on the city’s metro line on Tuesday – including the restart of production at Audi’s factory near the city (pictured).

With heightened security across European airports, rail stations and a number of border points, however, the latest attacks have raised further questions about the border-free Schengen zone – already under pressure as a result of the ongoing refugee crisis and the November terrorist attacks in Paris.

Earlier this month the heads of Daimler and GM’s Opel division both warned of the effects any further border tightening might have on their logistics operations.

As of today (Wednesday), Brussels airport remained closed to all passengers until further notice. According to the airport’s cargo website, outbound cargo operations were running as scheduled today after yesterday’s disruption, though there were still delays and cancellations on inbound cargo.

Following yesterday’s attacks, Audi cancelled the late shift on Tuesday at its assembly plant in Forest, south of the city centre, where the A1 sedan is built.

“Our site in Belgium was not affected directly by the occurrences, but we decided upon increased safety measures in the factory,” an Audi spokesperson told Automotive Logistics.