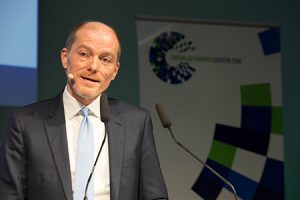 Robert Bosch and MAN Truck & Bus have been announced as dual winners of this year’s VDA Logistics Award, with digital logistics solutions in intra-logistics and empty container scheduling, respectively. It is the first time the award has been shared between two companies.

The award, from two of the country’s most important industry groups – the German Automotive Association (VDA) and the Federal Logistics Association (BVL) – recognises Robert Bosch for a number of digital solutions. These include connecting its self-developed software, such as ‘ProCon’ for production steering, with in-plant and warehouse transport, planning for equipment and systems, and the steering of both traditional and autonomous transport means.

In more than 50 plants, Bosch has been able to automate bookings, replenishment and real-time kanban loops, thanks to synchronised data exchange and digital processes.

“Bosch has big expectations for digital connectivity,” commented Andreas Reutter, member of the management board for the central department for purchasing and logistics at Robert Bosch. “The logistics chain will become more efficient, safer and more flexible, for intralogistics as well in our global value chain.”

Volkswagen Group-owned truckmaker MAN, meanwhile, has been recognised for developing its own software for empty container optimisation, ‘ConMa’, within eight months. The system, implemented in October 2016, is used for the planning and shipment of more than six million returnable containers.

ConMa is used to plan and manage standard processes across the entire scheduling process for containers, using intelligent algorithms to determine better transport utilisation and a higher level of automation.

According to project leaders Dr Matthias Conze and Fabian Maier, the system has helped MAN to redevelop container management.

The awards are judged by a jury of executives from across the German automotive and logistics sectors, including from Volkswagen Group, BMW, Daimler, Opel, Continental and ZF.

The VDA and BVL cited Bosch and MAN as important examples of the trend towards increasing digitalisation and connectivity of automotive logistics processes and equipment.

“The concepts we are recognising today represent the enormous innovative strength of the German automotive industry,” said Matthias Wissmann, president of the VDA, during a dedicated automotive logistics event in Frankfurt. “Connectivity and digitalisation aren’t just about making tomorrow’s transport more fluid and safer. They are also making intelligent logistics solutions and new factory concepts possible.”

Dr Robert Blackburn (pictured), chairman of the BVL, said the ongoing digitalisation of processes by suppliers and logistics providers would be highly relevant to the automotive industry, although he also expressed concern that small and medium-sized companies may struggle to keep up.

“As far as preparing for digitalisation, the German economy is overall highly motivated,” he said. “However, in terms of necessary investment in digitalisation, many medium-sized German companies are falling behind. And it is exactly these companies that would be helped by the more efficient use of limited resources [that digitalisation allows].”

Automotive Logistics will host its first European awards event on June 12th in Bonn, Germany. Entries can be submitted up to the end of February 12th and will be judged by executives from more than 20 companies including BMW, Volkswagen Group, FCA, Magna, Continental, Aptiv and many more. To enter, click here.