Jaguar Land Rover (JLR) has contracted electronic subcomponents supplier Wolfspeed to supply semiconductors for the inverters used in its forthcoming electric vehicles (EVs). Inverters manage the transfer of power from the battery to the electric motor. 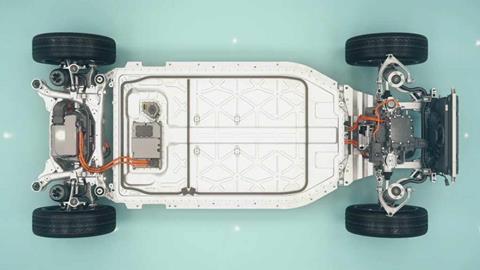 Jaguar Land Rover (JLR) has contracted electronic subcomponents supplier Wolfspeed to supply semiconductors for the inverters used in its forthcoming electric vehicles (EVs). Inverters manage the transfer of power from the battery to the electric motor.

The first Range Rover vehicles using the technology will be available from 2024, and the new all-electric Jaguar brand the following year. The silicon carbide microchips will also be used in the Land Rover Defender and Discovery models.

Wolfspeed already supplies semiconductors for Jaguar’s in-house developed Formula E racing powertrains. Thierry Bolloré, CEO of Jaguar Land Rover, said about the partnership: “We are not strangers, having collaborated together with the Jaguar TCS Racing team for the last five seasons.

Bolloré said that JLR was turning that existing relationship into a strategic partnership as part of its Reimagine strategy. “We can integrate Wolfspeed’s advanced silicon carbide technology into our next generation EVs, delivering extended range and performance capabilities for our clients,” he said. Reimagine is the name given to JLR’s strategy to achieve zero net carbon emissions across its supply chain and operations by 2039.

Wolfspeed produces silicon carbide semiconductors with a voltage range between 400v to 800v at its US factory in Marcy, New York state. The company announced in September that it was also building a North Carolina facility, to increase production capacity ten times. Prior to the contract with JLR, Wolfspeed secured a contract to supply GM with silicon carbide semiconductors in 2021.

Silicon carbide is a high-performance material in inverters and is sought after in EV production. In particular, high-capacity batteries and high kilowatt output systems benefit, with silicon carbide providing less resistance and reducing thermal management demands during charging or discharging of the battery.

Formula E, an all-battery-electric, single-seater racing series, places high regeneration demands on powertrains. During a 45-minute race, 30% of the energy used is generated from up to 250kW recovery from the vehicle’s rear brakes. Managing the efficiency of that recovery and balancing thermal stress on motor generator unit, inverter and battery has given Jaguar considerable race-to-road technology transfer since it first entered the series in 2016.

In 2019 Jaguar used the experience of racing its I-Pace electric SUV in a single-make series that ran alongside Formula E to add 20km of range to the car, using a software update. This year, it announced that analysis of Formula E drivers’ regenerative braking management had allowed it to extend plug-in hybrid range in the F-Pace and E-Pace by up to 10%, through another software adjustment. Using similar semiconductors in its electrified range to its race cars increases the potential for Jaguar to transfer knowledge.