Nissan and its battery making partner Envision AESC are investing £1 billion in a 9 GWh-capacity gigafactory next to the carmaker’s assembly plant in the UK. Nissan is also going to make a new-generation electric crossover at the plant.

Envision AESC is investing £450m to build the facility at the International Advanced Manufacturing Park (IAMP), adjacent to the Nissan plant. Called Nissan EV36Zero, the battery facility will make lithium-ion batteries for 100,000 Nissan electric vehicles (EVs) a year. Envision AESC has been making batteries at an existing battery making facility for the Nissan Leaf and e-NV200 EVs at Sunderland since 2012. The new bigger and more modern facility will increase output as well as providing renewable energy to make cars at the plant. Used batteries will also be given a second life as energy storage devices to improve sustainability. 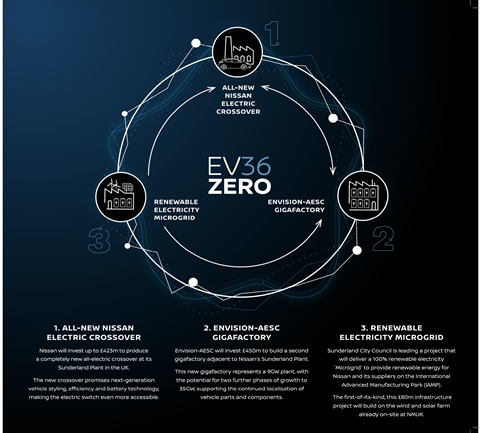 The plant has the potential to expand on the IAMP site and increase battery capacity to 35 GWh. Nissan said the plant will increase the cost-competitiveness of EV batteries produced in the UK, including through a new Gen5 battery cell with 30% more energy density to improve range and efficiency.

“This project comes as part of Nissan’s pioneering efforts to achieve carbon neutrality throughout the entire lifecycle of our products,” said Nissan president and CEO, Makoto Uchida. “Our comprehensive approach includes not only the development and production of EVs, but also the use of on-board batteries as energy storage and their reuse for secondary purposes.”

As part of the overall investment, Nissan will put £423m into produce a new-generation pure electric crossover built on the Alliance CMF-EV platform. The vehicle will be exported to European countries along with its other products and Nissan intends to further localise parts supply into Sunderland for the new vehicle.

Alongside the building of the gigafactory, Sunderland City Council is leading a project that aims to deliver a 100% renewable electricity ‘microgrid’ that will save 55,000 tonnes of carbon annually. That includes creation of solar and wind farms, including the ones Nissan already has in Sunderland, connecting to the renewable energy from the UK grid. Nissan said the microgrid could generate 132MW of power. The plan includes a 1MW battery storage system using second-life Nissan/Envision AESC batteries. 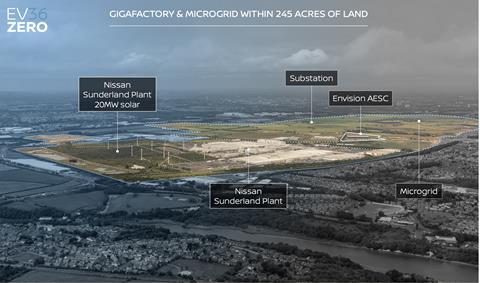 All together the interconnected projects are expected to provide jobs for 6,200 people working on site and through the UK supply chain.

“We reached a new frontier with the Nissan Leaf, the world’s first mass-market all-electric vehicle. Now, with our partners, Nissan will pioneer the next phase of the automotive industry as we accelerate towards full electrification and carbon neutrality,” said Nissan’s chief operating officer, Ashwani Gupta.

The development of the facility is an important step in the development of a domestic battery supply chain in the UK and the establishment of a net zero carbon automotive industry by 2030. Earlier this week, the Society of Motor Manufacturers and Traders (SMMT) in the UK called on the government to help support the installation of 60 GWh of UK battery production by 2030.