Stellantis is investing £100m ($137m) in Vauxhall’s Ellesmere Port plant for the exclusive production of electric vehicles. The move will contribute to the establishment of a net zero carbon automotive industry in the UK by 2030, by which time production of pure petrol and diesel engine vehicles is legislated to end.

Vauxhall became part of Stellantis when its former owner GM sold it to PSA Group in 2017. PSA Group then went on to form the Stellantis joint venture with FCA Group. That merger was finalised in January this year. 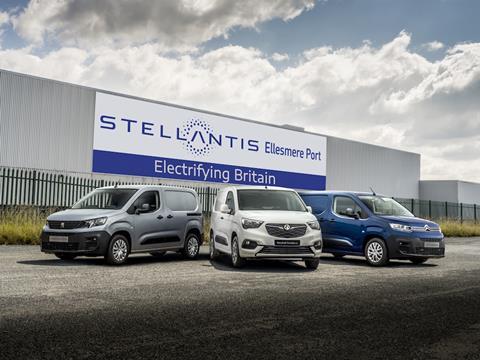 Ellesmere Port will be the first Stellantis plant to make battery-electric vehicles only, including commercial and passenger vans for the Vauxhall, Opel, Peugeot and Citroën brands (see box). Production will begin by the end of 2022 and the vehicles will be for domestic and export markets.

The Ellesmere Port announcement, which was made on July 6, is welcome news for a plant that had been slowing down production and cutting shifts over recent years. Initial annual output is now set at 50,000 units and the factory will return to two shifts. The production footprint is smaller for EV production so Stellantis will condense the site and reallocate land. It said it aimed to retain all 1,000 staff currently employed at the plant.

The investment, which is supported by the UK government, will result in a new body shop, upgraded assembly line and a battery pack assembly unit.

The battery cells and components are currently being supplied from Stellantis’ supplier in Europe but in the future will come from Automotive Cells Company (ACC), the joint venture set up last year between Group PSA, Opel, Total and Saft. By the end of 2023 ACC will have two gigafactories making batteries in Douvrin (France) and Kaiserslauten (Germany).

Looking ahead at the prospect of more localised supply at Ellesmere Port, a spokesperson for Stellantis said that the company was continually reviewing its supply footprint with a view to localising supply and would do so if the business case supported it.

Stellantis has also announced its intention to build a parts distribution centre on the Ellesmere Port site.

The carmaker said it aims to make the plant 100% self-sufficient for electricity and work will commence imminently on potential wind and solar farms.

“Today’s decision will not only power Ellesmere Port into a clean future but will secure thousands of jobs across the region in the supply chain,” said Kwasi Kwarteng, the UK government’s secretary of state for business, energy and industrial strategy. “In this global race to secure electric vehicle production, we are proud to support Britain’s auto sector in this crucial transition as we work to build back better.”

The Vauxhall announcement follows close on the heels of Nissan’s announcement that it is building a new EV at the Sunderland plant and investing £1 billion in a 9 GWh-capacity gigafactory with its battery supplier Envision AESC.