Volkswagen has established a new division – Volkswagen Group Components – tasked with reducing costs by €2 billion ($2.27 billion) while improving efficiency and taking on board the increasing importance of electric vehicles. 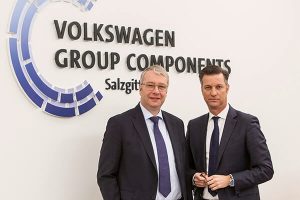 Thomas Schmall, chairman of the new division, said synergy effects would be realised more effectively through networking between factories and plant capacity being deployed in the optimum way across the group’s brands, which include Porsche, Audi, Seat and Škoda.

Group Components, plans for which were made public last year, was officially formed on January 1 and brings together 61 component plants that develop and produce engines, gearboxes, electric drive systems, steering systems, seats and other auto parts in-house for VW Group vehicles. The worldwide headcount totals around 80,000.

The OEM said the new division would be among the world’s largest automotive industry suppliers from the start. Stefan Sommer, responsible for components and procurement on the VW group’s management board, added: “Thanks to our manufacturing depth and product strength, we can measure ourselves with our best competitors.”

Schmall said Group Components’ goal was to save a total €2 billion of costs by 2025, including €750m-plus saved at German plants between 2016 and 2018. Among the ways that had been achieved was by products that were deemed not to have a viable economical future being removed from production plans.

Longer term, partnerships or cooperation arrangements with other companies are being considered to achieve economies of scale for lower-volume products.

The new division is also being given responsibility for electric vehicle batteries, from development of cell production through to recycling.

The switch to EVs will have a major impact on Group Components, which produced more than 10m conventional vehicle engines and over 8m gearboxes last year. But VW is not writing off petrol and diesel-fuelled cars just yet.“Conventional powertrains will continue to be important over the next few years,” said Schmall.

“Vehicle components such as engines, gearboxes, steering systems, axles and seats are the cornerstones of our success. With further activities in the growing area of e-mobility and new strategic partnerships, we will ensure a successful future for our product portfolio,” he added.