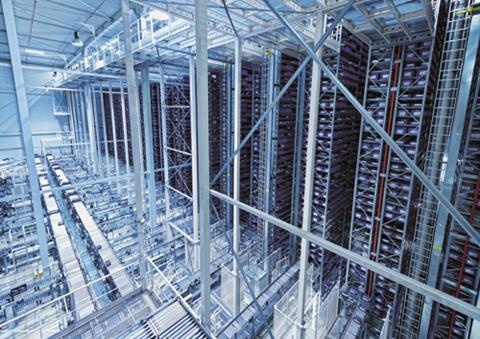 Flexible logistics are not just about incremental efficiency for Audi; according to Ingolstadt’s Johannes Marschall and Neckarsulm’s Dieter Braun, they help ensure the profitability of German production, and are essential to three-shift production at both plants.

Logistics processes also support Audi’s distinct production system, which builds different models on the same line in sequence of order, rather than in batch quantities or ‘smoothed’ in Japanese-style heijunka. For example, in Ingolstadt in 2014, Audi has added production of the A3 Sportback e-tron, the first plug-in hybrid at the plant. The car, whose production had reached 50 per day by the end of the year, is built alongside the existing A3 without the need for separate manufacturing areas.

Such product variety on the line impacts in-plant handling space and equipment requirements, with a huge diversity of parts that must be managed. It also influences inbound transport, requiring tighter control over supplier dispatches and delivery accuracy.

Like other carmakers, Audi uses a variety of supplier and line-side delivery types for material, the use of which depends on part size, variety and frequency. The methods are the same at both German plants, but depending on the infrastructure and boundary conditions, the shape is different between them.

One method is the consolidated or direct delivery of components from suppliers. These either move directly to the plant or to nearby logistics centres for resorting.

Another type of flow is the just-in-sequence (JIS) delivery of parts, which are often systems or modules with wide variation, such as bumpers, floor carpets or wire harnesses. At Ingolstadt there are a number of suppliers receiving material and doing sequencing activity at the ‘GVZ’ logistics centre adjacent to the plant. At Neckarsulm these arrive mostly from suppliers in nearby industrial estates. Long distance, ‘pearl chain’ suppliers may also deliver in sequence, often through a plant’s trailer yard.

Finally, and critically, there are deliveries from suppliers that move through automated parts warehouses, which consolidate material for large- and small-load carriers to the assembly floor. For Ingolstadt, these warehouses are part of the GVZ, while in Neckarsulm they are directly in the plant.

Many parts, many boxes

Plant logistics is always an effort to maximise volume within limited space, but in Germany, Audi demonstrates this par excellence, especially in the use of small-load carriers, picking systems and parts supermarkets. At Ingolstadt, the lynchpin to the process is the GVZ, opened in 1995 and since expanded to include 16 halls and 450,000 sq.m of floor space. The GVZ is connected to the plant by a covered, 400-metre bridge, with much material moving by electric tractors.

Around 20 tier one suppliers and logistics providers repack, sequence and sub-assemble material at the GVZ; the centre also has halls for CKD packing, consolidating material such as air bags, fuel tanks and car keys for overseas plants. The GVZ is linked across a secure IT network infrastructure that connects all the suppliers and providers to production.

“JIS suppliers receive their call-off information via standardised interfaces and generally use their own IT systems to control their own production,” says Marschall. 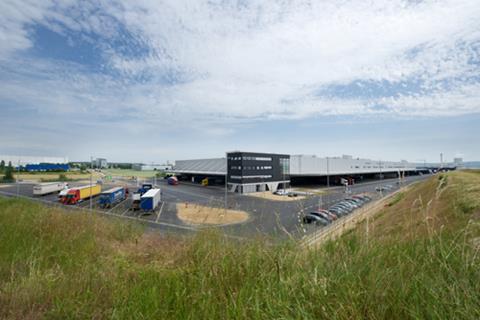 Finally, an automated high-rack storage system at the GVZ moves 45,000-50,000 small carriers each day between depositing and withdrawing stock, supplemented by another 15,000 large-load carriers.

Interestingly, Audi was not the only or principal investor in the GVZ; the logistics centre actually has two owners: IFG Ingolstadt, a company fully owned by the city of Ingolstadt, and LGI, a joint subsidiary of IFG Ingolstadt and Audi.

Neckarsulm uses a logistics centre, but in a somewhat different way. It recently consolidated a number of satellite operations at a 38,000 sq.m logistics centre at the Böllinger Höfe industrial estate in Heilbronn, 6km from the plant, where production of the specialised quattro R8 is now also based. The centre, operated by a logistics provider, acts mainly as a crossdock and partly as a sequencing centre for Neckarsulm and quattro. It has 22,500 storage places and moves around 4,500 containers per day to the assembly line, which are monitored by GPS.

Böllinger Höfe is smaller than the GVZ in size and scope, partly due to sequence suppliers feeding Neckarsulm at other nearby locations, but also because of the carrier warehouses at the GVZ. At Neckarsulm, around 27,000 small carriers are handled each day, plus large carriers for the A6 and A7. This is half the level of the GVZ, but it is also located directly in the plant, and so boxes move a shorter distance to the line.

Boxes and containers move from the warehouses to the assembly line, or to supermarkets on the shop floor. At the GVZ’s small parts warehouse, conveyor belts, known as ‘loops’, transport containers to logistics supermarkets for further picking before line delivery.

The process for moving large-load carriers to final assembly at Ingolstadt is also somewhat special because the line and the bodyshop are one floor up from the logistics areas. The containers are consolidated into a truck and then lifted entirely to the first floor, from which point Audi employees take over the supply using tugger trains. There are three such lifts in the GVZ and four for the plant logistics area. The lifts have capacity for 44 tonnes and many transport more than 30 trucks per day from one floor to another.

“It is very efficient to bring the truck one level higher rather than bringing each of the boxes up,” says brand logistics head Michael Hauf.

Logistics providers move the small boxes directly to the line at Ingolstadt. However, parts that don’t fit into such packaging are transhipped again in supermarkets on the shop floor, where Audi workers repack parts into Warenkörbe (kitting carts). These kits are brought to the line and move with workers and the cart. “The small packaging and supermarkets support the ‘worker’s triangle’ for Audi,” says Hauf. “The worker picks the part from the Warenkorb, brings it to the car and both he and the Warenkorb move with the car as he assembles it.”

It may seem confusing that Audi tranships many parts into small and large containers, then double or triple handles them through supermarkets, however this strategy allows it to use the safest and most efficient transport for each transport leg. “Sometimes it isn’t possible to put a part in a small box [for inbound transport] because of its size, so you have to move it in big boxes to the plant, before presenting it to the line worker in a more effective way,” says Braun. 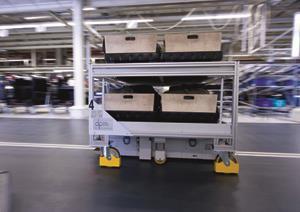 Compared to other line-side delivery methods like kanban or JIS flows, this process clearly has higher handling, IT and packaging costs. However, it also enables the plants to handle more parts and build a much wider variety of vehicles on the same line, saving investment and space.

“If you only reflect on the logistics cost, it is more expensive to double or triple the amount of boxes that you handle each day,” agrees Braun, “but in Neckarsulm, for example, we were able to add the A7 and hybrid models to the A6 line without extending the line.”

“Our complexity is the complexity of managing 140 takt times across just one production line,” adds Johannes Marschall. “The space on the assembly line is limited, so one of the ways to increase our output is with Warenkörbe via supermarkets.”

Line-feed operations do nevertheless look different at Audi’s newer or expanded factories. At the German plants, supermarkets are spread across the shop floor where space allows. In the Hungary plant, there is a large, central area that feeds assembly.

“For Gyr, we consolidate a lot of the material in Ingolstadt, and send three large trains per day,” says Hauf. “With only one main flow, we use one, really large supermarket.”

The new plant in Mexico will receive a large amount of overseas parts via the CKD process and will also have a more central kitting area – although the plant will be engaged in part-by-part production and not knockdown assembly overall.

The principles are nevertheless the same and the supermarkets and kits incorporate features like pick-by-light or colour systems, as well as RFID tags to help identify incorrect parts. 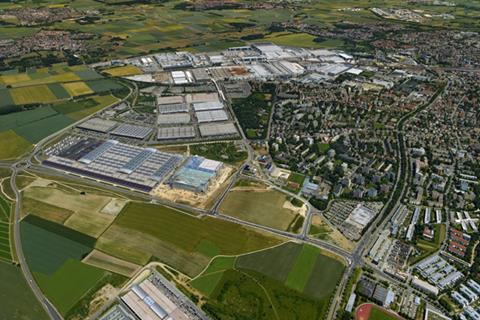 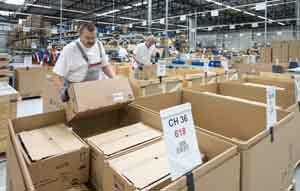 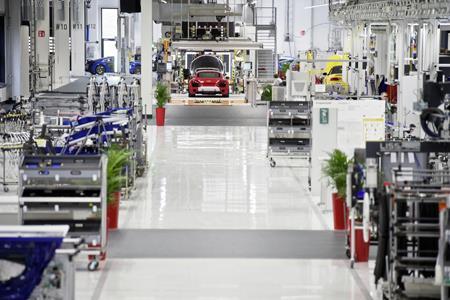 In the hands of others

An interesting feature of the GVZ logistics centre in Ingolstadt, which has also been replicated at other Audi operations, is the degree to which parts handling and material flow are outsourced to logistics providers or suppliers. While Audi establishes the systems and programme, around 20 suppliers and logistics companies provide labour in the centre.

For example, incoming goods to the GVZ are managed by a logistics provider, which is responsible not only for the receipt of goods and warehousing, but also the stock removal and transport of large-load carriers to the transhipment location in the plant. From there, Audi employees take over the supply of the assembly line using tugger trains.

In some cases, providers or suppliers can move material directly to the line at Audi. For example, a logistics provider operates the GVZ automated small parts warehouse, where small-load carriers are transhipped; from here a service provider even carries out the line feeding, says Johannes Marschall.

There are similar processes and setups in other Audi plants; in Hungary, the logistics centre is outsourced entirely, for example. In Neckarsulm, a logistics provider has taken over management of the new Heilbronn logistics centre, while other providers operate in the plant as well.

“We use providers in the plant, but on the strategic assumption that we lose neither our client capability nor our authority,” says Dieter Braun