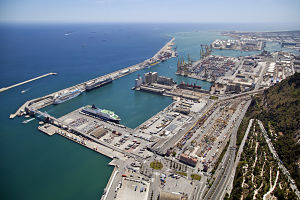 The ports of Koper in Slovenia and Barcelona in Spain (pictured) are studying ways to improve the handling of electric vehicles, including putting any necessary new infrastructure into operation.

The move forms part of the CarEsmatic project, which supports traditional and electric car distribution using ‘Motorways of the Sea’ solutions and promotes sustainable shipping concepts.

With help from terminal operator Autoterminal and shipping company Neptune Lines, the two ports are assessing current technology like rapid charge points and mobile chargers, as well as future growth and costs.

Eventually, different charging points for electric vehicles will be installed at both ports and aboard the two Neptune Lines vessels that regularly link Barcelona and Koper.

CarEsmatic is receiving financial support as part of the 2015 Connecting Europe Facility programme, with the European Union having a 30% stake.

The overall objective is to develop an east-west ‘Sea Motorway’ service in the Mediterranean linking the two ports, providing a direct link for automotive manufacturers. New infrastructure is planned, as well as upgrades for existing facilities.

At Barcelona, the northern extension of the rail terminal on Muelle Príncipe de España is included in the project. This will enable several trains up to 750 metres long to be accommodated on a three-track fan.

This work will complete a modernisation programme at the rail terminal, which initially involved adding UIC standard gauge track to existing links (Spanish broad gauge and metre gauge). It has also required extensive work in and around the terminal to improve access, with an entirely new access road to be built to Autoterminal.

The three new tracks will range in length from 947 metres to 1,108 metres, allowing trains conveying finished vehicles to be loaded and unloaded in two sections. The separation of tracks and adjacent holding areas for finished vehicles, meanwhile, will allow several trains to be worked on simultaneously.