BMW is expanding the fleet of hydrogen fuel cell trucks it uses to manage parts movements at its Leipzig plant in Germany. 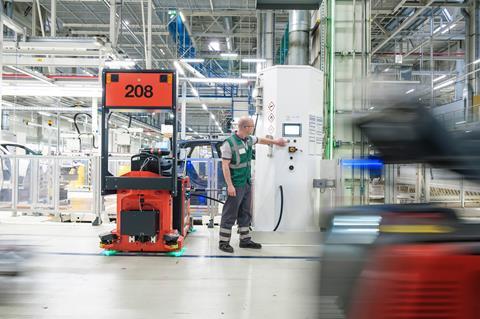 The addition of the latest vehicles brings the number of hydrogen fuel cell trucks being used on-site at Leipzig to 118. According to the carmaker, they first began introducing the equipment back in 2013, and it is now the largest hydrogen-powered logistics fleet in Germany.

BLG is using the equipment over a 200,000 sq.m area where it receives incoming parts and stores them in the warehouse before sequencing and order picking them for delivery to the assembly line. The company is also processing returnable empty containers.

“When we received the request from our customer BMW Group to exchange around 40 of the almost 200 industrial trucks that we use as a logistics service provider in the plant for hydrogen forklifts, we didn’t think twice about it and were happy to say yes,” said Markus Niemeier, head of BLG’s operations at Leipzig. “Sustainability is also a top issue for our company.”

Like BMW, BLG Logistics said it aimed to become carbon neutral by 2030.

“The idea of using emission-free industrial trucks and the use of green electricity, or the integration of energy from renewable sources, is a central component of our climate protection efforts,” added Jakub Piotrowski, head of digitization, sustainability and IT at BLG.

In May this year, BMW’s Leipzig plant hosted the Central German Hydrogen Summit. Hans-Peter Kemser, director of the plant, outlined that using hydrogen-powered equipment carrying required parts to the assembly lines was a first step in the wider adoption of green hydrogen at the plant.

The Hydrogen Summit also provided the backdrop for BMW Leipzig to inaugurate its fourth on-site hydrogen filling station. The first went on stream in 2013 in the BMW i bodyshop and was the only indoor hydrogen refuelling station in Germany at the time. Two more followed in 2018, and a fourth is now also set to supply the steadily rising number of hydrogen vehicles. About 50 kg of certified green hydrogen is put into the tanks every day.

BMW’s Leipzig plant makes the BMW 1 Series, BMW 2 Series Active Tourer and BMW 2 Series Gran Coupé alongside the BMW i3. The plant is currently making more than 1,100 vehicles a day. Regarding inbound material flow, the Leipzig plant handles 16,000 cubic metres of parts a day and 80% of them are delivered just-in-time and just-in-sequence.

In July the carmaker marked 20 years since it first announced it was building the Leipzig plant.