BMW looks to the cloud to boost productivity 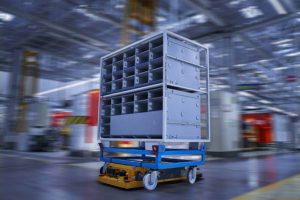 BMW has begun using a digital cloud platform built on software supplied by Microsoft to increase manufacturing and supporting logistics productivity. The Open Manufacturing Platform (OMP) is designed to accelerate the use of internet-of-things (IoT) technology in the supply chain and factory. BMW said it would be shared among OEMs, tier suppliers and logistics providers to bring efficiency across manufacturing and supply up to final assembly.

According to BMW, the system, built on the Microsoft Azure Industrial IoT cloud platform, already supports 3,000 connected machines, robots and autonomous transport systems (ATS). That includes the second generation of ATS the German carmaker is deploying at its Regensburg plant in Germany for warehouse to lineside parts deliveries. It said the connection via IoT technology had greatly simplified its logistics processes because it allowed for central coordination of the transport.

“In the future, this and other use cases, such as digital feedback loops, digital supply chain management and predictive maintenance, will be made available and, in fact, developed further within the OMP community,” said the company in a statement.

According to BMW, the OMP will address common industrial issues such as machine connectivity and on-premises systems integration. It will also facilitate the reuse of software among OEMs, suppliers and other partners, enabling a reduction in implementation costs. BMW used the example of an ROS-based robotics standard for autonomous transport systems for production and logistics that would contribute to the OMP for everyone to use.

“Microsoft is joining forces with the BMW Group to transform digital production efficiency across the industry,” said Scott Guthrie, executive vice-president, Microsoft Cloud and AI Group. “Our commitment to building an open community will create new opportunities for collaboration across the entire manufacturing value chain.”