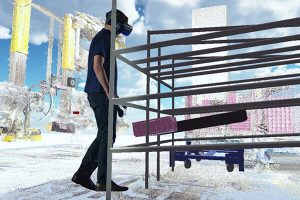 BMW Group is to expand its use of industry 4.0 innovations in its production logistics, it has revealed.

In 2015, BMW Group joined forces with the Fraunhofer Institute IML to develop the first self-driving Smart Transport Robots (STR). Three years later, the carmaker is increasingly relying on innovations from industry 4.0 in its production logistics, including robots, autonomous transport systems and digitalisation projects, those attending its innovation showcase last month in Regensburg, Germany, were told.

Several logistics processes are being controlled from mobile devices such as smartphones and tablets, while virtual reality applications are being used to plan future logistics areas, based on 3D data modelling.

The OEM has also been collaborating with start-ups, research institutes and universities, notably trialling AR glasses as part of a PHD project, which, when used for scanning and packing in the warehouse, have increased productivity by 20% and reduced the error rate by 33%.

“We always have several pilot projects running at our locations worldwide,” Marco Prüglmeier, head of innovations and industry 4.0 for BMW Logistics, told Automotive Logistics at the event. “We operate like a start-up within the BMW Group and make sure we have access to the latest findings and technologies. We have already transferred a number of [pilot] projects to series production, with further implementations planned for the future.”

Showing robots (and ants) the ropes
Among the innovations presented at the event were four transport robots with autonomous navigation functions, which are currently being tested or have already been integrated into series production.

Stationary SplitBots, which can take full plastic boxes from a pallet before placing them onto a conveyor system that transports them to a warehouse, are expected to be used in series production at BMW Group Plant Dingolfing from 2019.

The moveable PlaceBot, which unloads tugger trains and places boxes loaded with goods on a shelf, is currently being tested on the assembly line and over the long term, while the PickBot (pictured below), which collects various small parts from supply racks, should soon be able to recognise and handle up to 50,000 small parts. According to the OEM, the PickBot will probably be used in series production at the BMW Group plant in Leipzig from 2019.

The SortBot is already deployed in series production at the OEM’s Leipzig plant and stacks empty containers on pallets before they re-enter circulation. Three SortBots will be in use at Leipzig by the end of the year.

Meanwhile, at BMW’s body shop at Regensburg, autonomous lift trucks called “ants” have been piloted over the past 12 months. These are used to bring components from the plant’s ‘supermarket’ to the point of installation. Going forward, a total of eight ants will supply other areas of series production.

Connected supply chain
While the carmaker’s in-house logistics innovation team and engineers have been exploring and implementing digital processes, BMW executives emphasised the importance of working with its supply chain partners and 3PLs. 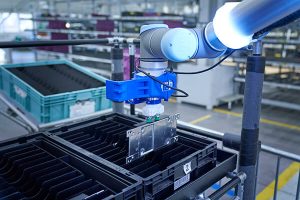 Since mid-2018, a number of suppliers and transport service providers in Europe and Mexico have been integrated into the system. According to BMW, by the end of 2019, several thousand partners are expected to be connected. The CSC system also lays the basis for predictive analytics and artificial intelligence (AI) in supply chain control, the carmaker said.

According to the OEM, the platform will soon be able to support autonomous vehicles built by different manufacturers. “We are involved in the German Association of the Automotive Industry (VDA) and Mechanical Engineering Industry Association (VDMA) to establish a standard that will enable communication between all autonomous transport systems in the marketplace,” explained Jurgen Maidl, senior VP logistics, BMW Group. “Regardless of the manufacturer, every autonomous transport system should be able to exchange data with BMW Services.