This year’s Automotive Logistics and Supply Chain North America Live conference revealed how a strong rebound in North American vehicle sales has taken the supply chain by surprise and exacerbated the misalignment in inbound supply and capacity caused by the Covid-19 shutdowns. 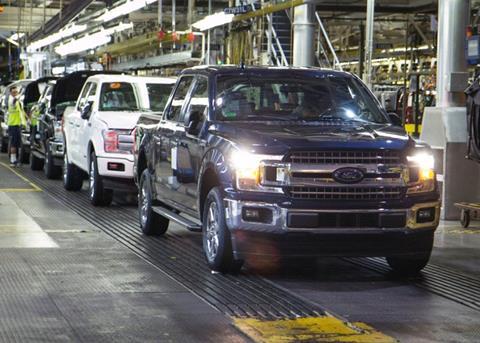 Manufacturing is being hit by inbound parts shortages because of congestion at the ports and a lack of subcomponents, particularly semiconductors. Parts suppliers and vehicle manufacturers are working hard to meet demand despite these challenges but are doing so with a reduced labour force and under existing workplace safety protocols. As a consequence, inventory is not likely to start its gradual recovery until the end of 2021.

Global sales fell 14% last year to 76.8m, a slump far worse than the global recession of 2008, but are forecast to recover to above 84m this year (+10%), according to figures from business analysis firm IHS Markit. There was a strong rebound in most markets in the second half of 2020, though some have grappled with a second wave of Covid lockdown restrictions, including countries in Europe. Other markets continue to face elevated levels of infection, including the US and India. However, those high rates of Covid do not seem to be restricting new vehicle sales and carmakers have embraced online sales options throughout the crisis. Market optimism is also now being bolstered by the prospect of wider vaccine distribution.

“We have seen a much stronger recovery that what we expected,” said Guido Vildozo, senior manager, Americas light vehicle sales forecasting at IHS Markit. “I don’t think anyone would have envisioned a market that closed at 16.2m in the fourth quarter of 2020, relative to starting off the year at a pace of 16.8m, particularly with the event of the pandemic and the trajectory we saw in the US.”

According to Vildozo, there are several reasons for this. One is that the desk job demographic has not suffered financially and has money to spend on buying new passenger vehicles since the lockdown. Those same people have migrated out of the city centres in recent years and need their cars to commute. There has also been accessible credit and zero financing spread over up to 84 months, though those incentives took a dip toward the end of the year because of the high demand.

“Those elements have triggered momentum at a faster clip than we could have envisioned at this point last year, particularly as we saw what was happening in China,” said Vildozo.

That said, sales are not expected to rise much above a plateau of 16.5m for the rest of the decade. That is because of factors such as depressed fleet demand and a shift back to public transit by a vaccinated population.

You can watch Guido Vildozo’s full analysis on demand here.

The shutdowns between March and May last year resulted in a decline in vehicle manufacturing of 20% to 13m units, according to figures from IHS Markit, and the recovery of that lost production will run into 2022. That production will be predominantly to meet demand for pick-ups and SUVs in North America, though electric vehicle makers are expected to contribute up to 250,000 units to the 16.7m units of output forecast for next year.

As indicated, sales remained surprisingly strong for the year despite the production losses, resulting in a sharp 32% decline in available inventory from the 3.8m in March last year (down to 2.6m).

What is more, that inventory level is not likely to start growing again until at least the second quarter of 2021, according to Brandon Mason, lead analyst for global market intelligence at power management company Eaton. Continuing strong demand is beating replenishment, especially for high-demand products.

Dealers have sold deep into that inventory and have been working with partners to trade vehicle inventory and get their customers what they want. Vehicles have been moving in days and, according to GM, some dealers have even reported selling the most sought-after products, particularly the pick-up trucks and full-size SUVs, off the back of newly arrived car carriers before they were even unloaded.

“Plants are not at full production capacity – labour continues to be an issue as Covid cases have risen – so we don’t see a significant rise in inventory for a while,” said Mason. “If we talk about the various supply chain issues we expect to happen, probably through the first half of this year, it won’t be until the second half that we will see a gradual recovery in inventory, but not to pre-Covid levels any time soon.”

Amongst those supply chain issues is the congestion currently anchoring ships off the US west coast. That has been caused by supply and capacity misalignment following the production shutdowns caused by Covid and the sharp rebound in demand. As reported elsewhere, the surge in cargo movements that followed the first wave of the coronavirus lockdowns in China has met with restricted capacity in the distribution network. That has been caused by a displacement of containers and tighter capacity at inland warehouses and distribution centres.

A shortage of semiconductors is also hampering automotive production, a result of manufacturing plants having to reorientate to other markets when Covid-19 shut down automotive demand in first half of 2020. That situation is likely to continue through the rest of this year and carmakers will have to strengthen its connections to the semiconductor manufacturing supply chain to avoid future disruption.

US light vehicle sales continue to be dominated by SUVs and pick-up trucks, while new sedan sales plummet, something accelerated by the Covid pandemic and its impact on lower wage earners, such as in the service industry, who Vildozo said were more likely to buy sedans. This is having an impact on production in Mexico because it is one of the biggest hubs of sedan production in North America.

Watch the session with Brandon Mason on demand here.

Light vehicle sales in Mexico are in for a very long, staggered recovery, according to Vildozo. Fiscal stimulus for the economy is below 2% and currency devaluation is expected permeate to higher vehicle prices. However, Mexican drivers have also benefited from strong incentives including payment plans and insurance coverage, and there are signals that low double-digit expansion is feasible in 2021. According to IHS, there are signs of life in the subcompact and compact segments, which is critical because they account for half of domestic sales.

However, Covid infection rates are increasing across the country and stood at 1.9m in the first week of February as the country ran out of vaccines. Mexico City accounts for around 25% of light vehicle sales and the increasing rate of infection and death could lead to a lockdown affecting sales.

“This is putting some strain on and adding costs to manufacturing because one of the challenges is the absenteeism ratio throughout different plants in North America, which occurs in any location where you suddenly have a hotspot for Covid,” said Vildozo.

Manufacturing shutdowns and shortages in supply between regions also leaves companies having to resort to more costly emergency logistics, which is a drag on profitability.

Annual Mexican vehicle production is forecast to remain at around 3.7m units over the next decade, accounting for 22% of regional output in North America. Of that production 80% is exported (equal to about 3.5m at its height), with the majority going to the US and Canada, but Mexico has 11 different free trade agreements involving 46 countries around world.

The boost to production output seen in the wave of investment since 2014 is unlikely to be replicated and the move to EV production is not expected to take off to the same extent it is in other carmaking locations. Ford has announced production of the Mustang Mach-E at its plant in Cuautitlan, Mexico. However, EVs will only account for about 25% of Mexican vehicle production in four years’ time, which is drastically different from other markets around the world.

Demand north of the border will not be as high until environmental regulation aimed at boosting EV sales comes into play. California’s Clean Air Act, aimed at stricter air pollution standards for vehicles than the federal government’s, has yet to be mandated by national federal legislation. The Environmental Protection Agency (EPA) must first approve a waiver before California’s rules may go into effect, though it is significant that US president Biden is seeking to reverse the previous administration’s attempts to crush the act.

In Canada, annual production is expected to stay around 1.5m units. The Ontario manufacturing base is ripe for investment but wages are high and the cost of moving manufacturing there is expensive. However, with support from the government the region could develop into a base for EV development in the coming years.

Canada has certainly found a new floor at around 1.5m units,” said Vildozo. “This is very relevant because we usually assume that Mexico is taking some of the momentum away from Canada because of the fact that Mexico has a larger number of FTAs.”

At the same time that the 1.5m annual production is putting a strain on the Canadian market and there have been tough negotiations between the unions and the carmakers.

In September last year the Unifor union, which represents Canadian automotive workers, reached a tentative three-year contract agreement with Ford in Canada, that includes the building of five new EVs at its Oakville plant in Ontario. That represents the first major investment in EV development in Canada. The overall agreement include US$1.46 billion in factory investments at Ford’s three Canadian factories.

Unifor also negotiated a deal with GM to renew production at the carmaker’s Oshawa plant from 2022, following GM’s previous announcement that it was closing the plant, and more recently secured an investment of $1 billion in GM Ingersoll to add a new electric van – the BrightDrop EV600.

“In financial terms going forward it is a question of how quickly the industry can recover in 2021 and beyond, and then with the larger implications of the shift to electrification, where do those automakers play in that new world,” said Mason. The name of the game this year is to get past Covid and the supply chain issues, and get back to building.

Manufacturing in Canada needs this sort of to ease the transition into the US-Mexico-Canada Agreement (USMCA). Canada’s primary concern when it comes to trade is the USMCA and its prospects with its North American neighbours.