Volkswagen is using a combination of rail and automated unloading to move batteries to its plant in Zwickau, Germany, its first plant dedicated to electric vehicle production, which is currently making the ID.3 and ID.4 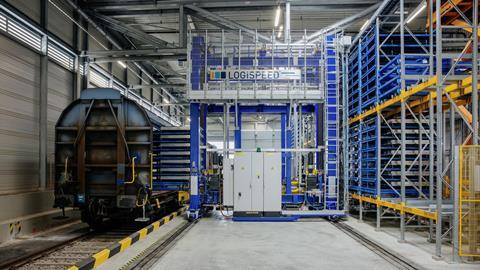 The move further reduces the carbon footprint of the plant and is another step closer to its zero-emission sustainability strategy – goTOzero. VW said that since 2017 it has been able to reduce carbon emissions at Zwickau by 60% or more than 100,000 tonnes per year.

The carmaker is using rail for the supply of battery cells from its supplier LG Chem in Wroclaw (Poland) to its Volkswagen Group Components plant in Brunswick (Germany), where the battery modules are assembled. It is then also using rail for the transport of the battery modules to the Zwickau plant. Five trains a week are currently running between Brunswick and Zwickau, with more planned in the future as EV production increases at the plant.

VW is in the process of switching all the materials, parts and vehicles it moves in Germany with state run rail provider Deutsche Bahn (DB) to green electricity by 2021. Currently 95% of VW freight movements carried by DB Cargo in Germany are accounted for by power generated by wind farms and hydropower plants. Bringing the figure up to 100% will save more than 26,700 tons of CO2 emissions annually, according to the carmaker.

Within the Zwickau complex the company is using fully electric 40-tonne trucks to move the batteries from the unloading station at Harvesse to the assembly point.

“With this green and efficient logistics chain, we are making a key contribution to reducing emissions within the group and to the delivery of the Volkswagen ID.3 and ID.4 with a neutral carbon balance,” said Thomas Zernechel, outgoing head of Volkswagen Group Logistics.

The carbon-neutral strategy undertaken by VW is significant given that next month the EU is set to announce a set of environmental criteria for the production of batteries. 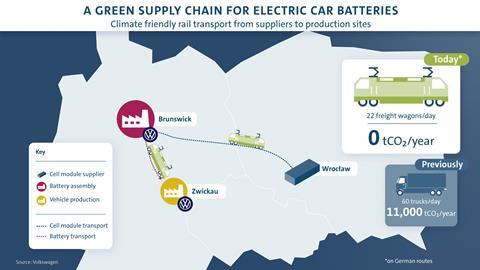 “In short, any vehicle battery imported to the EU (or produced within the EU) is likely to have to demonstrate carbon-neutral battery cell production. Those that don’t could in theory be banned from use in the EU Bloc,” said Daniel Harrison, analyst at Ultima Media’s business intelligence unit, Automotive. That move is a sign that the EU is trying to secure the battery value chain by discouraging cheaper Asian imports and helping to establish a European battery supply chain. China currently accounts for 80% of lithium battery production but Europe is currently expanding more capacity. Better battery supply in Europe is crucial to the region’s ability to meet increased production of EVs.

At the European Conference on Batteries held online this month European Commission vice-president, Maroš Šefčovič, said he was confident that by 2025 the EU will be able to produce enough battery cells to meet the needs of the European automotive industry, and even to build on export capacity

Automated unloading
For shipment of the battery cells and assembled modules, Volkswagen Group Logistics has developed special containers that can be used both. They are designed to make maximum use of the weights and volumes allowed by the rail cars used, said the carmaker.

The unloading and loading systems at Zwickau and Brunswick highly automated, something VW said was “an essential prerequisite for efficient battery assembly” at the German plants. The loading cars at Brunswick and Zwickau have an empty weight of about 25 tonnes and travel on dedicated tracks beside the trains. They lift the special containers with battery modules or battery systems into or out of the rail cars automatically. VW said the loading or unloading of each train only takes about five hours.

Among the other notable logistics developments at Zwickau are the use of a virtual container acceptance system and the use of fully digital and automated logistics retrieval and control systems.

Read more about the pioneering logistics supporting EV production at Zwickau in our interview with Stefan Mader, manager of logistics planning and control at the plant