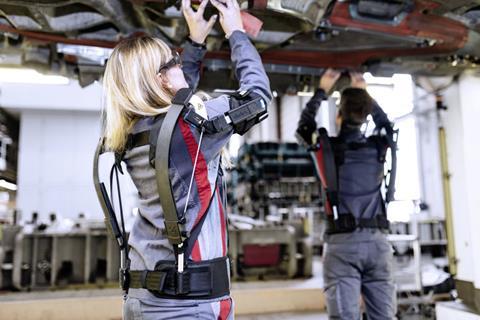 German carmaker Audi is trialling two types of exoskeletons to see if they can lessen the load for production workers.

The external support structures are designed to help employees when they are performing overhead work by protecting their joints and muscles.

Around 60 employees are using the exoskeletons in a comparative study over several weeks at selected workstations in assembly, paint shop and tool construction at the Ingolstadt factory. Audi says it has already had initially promising results from one of the exoskeletons in the Győr plant, Hungary.

As Audi points out, many processes in production involve overhead jobs that are unavoidable, such as installing brake lines, screwing underbody panelling into place, and applying corrosion and sealing protection.

When technical and organisational measures for optimum ergonomics have been exhausted, exoskeletons can offer valuable support. The two being tried out are the Paexo from Ottobock and the Skelex 360 from Skelex.

“Our employees are our most important asset,” said Peter Kössler, management board member for production and logistics.

“By constantly reducing the burden at the workstations, we can enhance their health and wellbeing. New technologies such as exoskeletons, with which we are making production more and more progressive, also contribute to this.”

Among questions being posed through the tests are: Is freedom of movement restricted? Is the material still pleasant even after it has been worn for some time? How much support do exoskeletons offer employees in performing their tasks?

The comprehensive practical tests, staged in both static and dynamic activities, are designed to help adapt the exoskeletons to employees’ needs in the best way, Audi said.

The support structures are worn like a backpack and secured in place with a belt around the hips. Arm shells support the arms when the wearer is performing overhead work. These absorb part of the arm’s weight and re‑direct it to the hips via support structures. This reduces the burden on the shoulders. This is done purely mechanically, without any motorised drive.

The tests on the Paexo and Skelex 360 are the latest in a series Audi has conducted in the four years it has been using exoskeletons. Uses to date in logistics include reducing the burden on a worker’s back when lifting or moving objects.